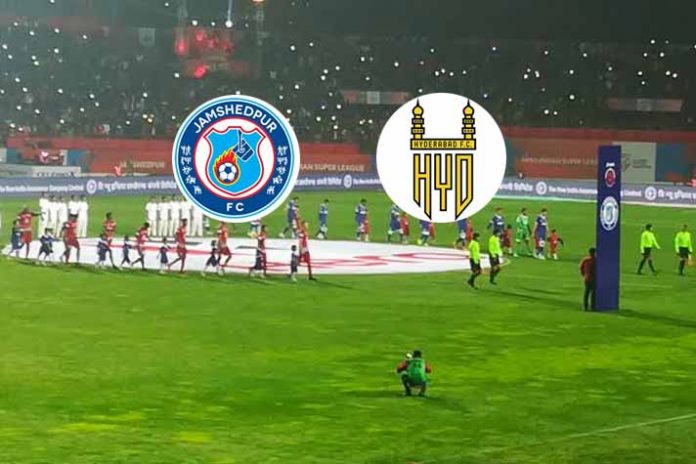 Jamshedpur FC will look to make it two wins in a row when they host a depleted Hyderabad FC in a Indian Super League clash today (Tuesday).

The visitors, playing their debut season, come into the match on the back of a 0-5 drubbing at the hands of ATK.

Jamshedpur in their opener had shown character and determination in a 2-1 win against Odisha FC, courtesy a late winner from Sergio Gastel, despite playing with 10 men for more than 50 minutes.

Head coach Antonio Iriondo had to adjust his tactics after Bikash Jairu’s red card and wait for the side’s opportunities. However, against Hyderabad at the JRD Tata Sports Complex, it will look to control proceedings from the opening whistle.

Piti, the experienced 38-year-old, will don the role of a playmaker and set the tempo for the team from the middle of the park. All eyes will be on Castel who has already made an impression in the opening game.

“The team is still under construction and we are still working on our style of play. The players made a great effort (against Odisha) and we are very happy with that.

“We are happy about the result, but we want to play better. At this point, we still have to improve. We didn’t have the ball control then, but we had control of the match,” Iriondo said.

Iriondo will miss the services of Jairu (suspended) and C. K. Vineeth, who is injured.

For Hyderabad, it was an underwhelming performance in Kolkata as several of its star players such as Marcelinho, Marko Stankovic and Giles Barnes failed to fire.

The decision to deploy Adil Khan as a defensive midfielder didn’t bring any reward either.

“We had some knocks after the first match. We were beaten 5-0 and it is not easy for the players when they go back home. It affects the mentality of the players. But we picked ourselves well, the group is okay,” Brown said.

Hyderabad has to cope with injuries to key players like Bobo, Barnes, Rafael Gomez and Ashish Rai. In addition, Spanish midfielder Nestor Gordillo is serving a lengthy suspension which means Brown’s options are limited.

“We don’t have too many quality players. The list of injuries to key players is fairly lengthy. We will be organised and hardworking and we know what Jamshedpur can provide,” he said.

Jamshedpur will be hopeful of a win against a team that has been plagued with injuries. Hyderabad will look to frustrate the home team and fashion a positive result.