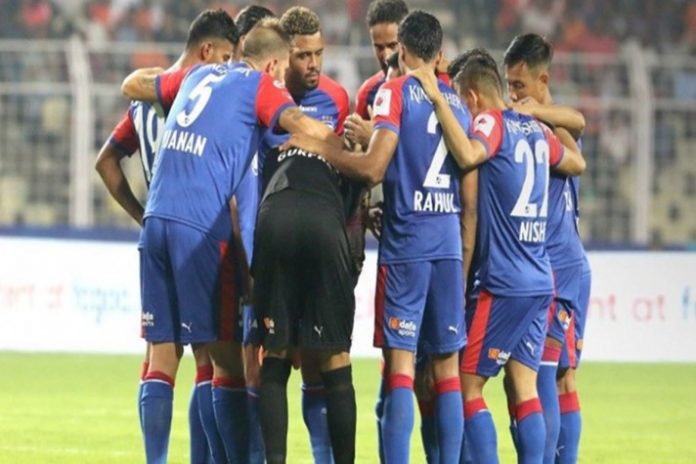 Bengaluru FC had to settle for their third draw in as many matches in the Hero Indian Super League after being held to a 0-0 scoreline by Jamshedpur FC on Sunday.

Goalkeeper Subrata Paul was the star of the show for the home team, making several stunning saves, while his opposite number Gurpreet Singh Sandhu also had a big part to play, pulling off some wonderful saves of his own.

The match got off to a flying start, with both teams trying to force the initiative early on. Sunil Chhetri forced Paul into a tough save in the seventh minute, before seconds later, Sergio Castel seemed to have the beating of Bengaluru custodian Sandhu but was thwarted by the upright.

Five minutes on, the away team squandered a big chance after Juanan beat Jamshedpur’s offside trap and found himself with room and time for a free header in the aftermath of a set-piece move.

Paul, however, made sure the ball stayed out of the goal. Shortly after, Raphael Augusto missed an even simpler chance as he failed to keep his header on target and even make Paul work.

There was, however, enough for the veteran custodian to do as he pulled off a wonder save to keep out Harmanjot Singh Khabra’s cheeky sidefoot attempt in the 20th minute.

The home team managed to create their own set of chances, but the lively first-half eventually ended goalless.

The hosts showed a little more urgency after the restart, but the first big chance of the second period again came the Blues’ way. Five minutes in, Manuel Onwu was set free on goal by a pass from the deep but Paul was at hand yet again to snuff the danger out.

His opposite number Sandhu was also called into action soon after as the India international stretched out a leg to divert Mobashir Rahman’s shot from just inside the box. The chance spurred on a phase of Jamshedpur dominance, and Sandhu was at the thick of things once more, as he kept out Farukh Choudhary’s spectacular overhead kick from Piti’s cross.

With both goalkeepers looking almost unbeatable on the night, it seemed like it would take a mistake or a moment of brilliance to break the deadlock. Substitute Ashique Kuruniyan tried his luck with one of his patent marauding runs around the 75th-minute mark, but found Paul in his way yet again.