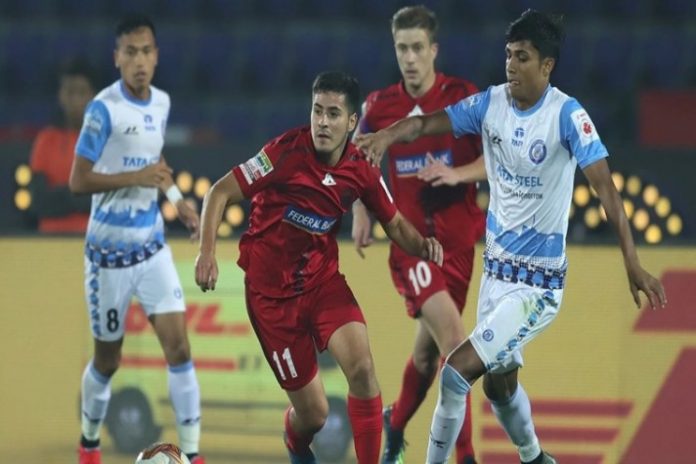 NorthEast United FC and Jamshedpur FC were on Monday involved in a six-goal entertainer that ended 3-3 in a Hero Indian Super League clash at the Indira Gandhi Athletic Stadium in Guwahati.

Although both teams are out of the play-off race, there was plenty of goalmouth action on show and in the end it was difficult to separate the sides.

Jamshedpur and NorthEast United stand seventh and ninth on the table.

It took just five minutes for NorthEast to break the deadlock. Ninthoinganba Meetei split the Jamshedpur defence with a good through-ball for Andrew Keogh whose shot was kept out by goalkeeper Rafique Ali. The rebound fell into the path of Gallego who placed the ball into the net.

Clear-cut chances were few and far between for both sides. Bikash Jairu could have equalised for Jamshedpur minutes after the half-hour mark, but a poor first touch to control Aniket Jadhav’s cross allowed NorthEast custodian Subhasish Roy Chowdhury to pounce on the ball.

The visitors came back into the game just before the break. Aniket won a header in the air and flicked the ball into the path of Amarjit Singh who delivered an accurate cross into the box from the right flank.

Grande rose the highest at the far post and found the back of the net with a good header.

Both teams chased opportunities to take the lead and for NorthEast, it came in the 56th minute. From a quick counter-attack, Martin Chaves chipped the ball into space behind the defence. Keogh made the run to get to the ball before Rafique’s attempt over the keeper went wide.

Jamshedpur had a few chances too before NorthEast took the lead in the 77th minute. Chaves ran down the left flank and outfoxed Memo. The substitute crossed towards the far post where Sandeep Mandi’s poor defensive header allowed Tlang to hit a nice volley into the net.

A persistent Jamshedpur attack was gifted a chance to equalise two minutes later when Vaz handled the ball inside the box. However, Subhasish came up with a good save to keep out Noe Acosta’s hit from the resultant penalty.

Acosta was in the thick of things again when he received a corner-kick in the centre of the box and directed it towards the goal but his solid strike bounced off the crossbar.

The visitors eventually equalised for the second time in the game in the 82nd minute. Acosta redeemed himself after receiving the ball outside the box and unleashed a brilliant, curling strike that flew past the extended gloves of Subhasish and into the net.

The NorthEast defence lacked the composure to see off the game and lost their cool in the final 10 minutes. Jamshedpur pressed hard and claimed the lead from a free-kick. Memo stepped up and struck a powerful effort into the net.

Jamshedpur, however, were dealt a blow when Farukh was punished with a second yellow card for his reaction to a bad tackle. A minute after the send off, NorthEast equalised.

Memo failed to clear a routine delivery into the box and Leudo scored with a powerful hit that bulged the net and made it 3-3, capping an exciting game.