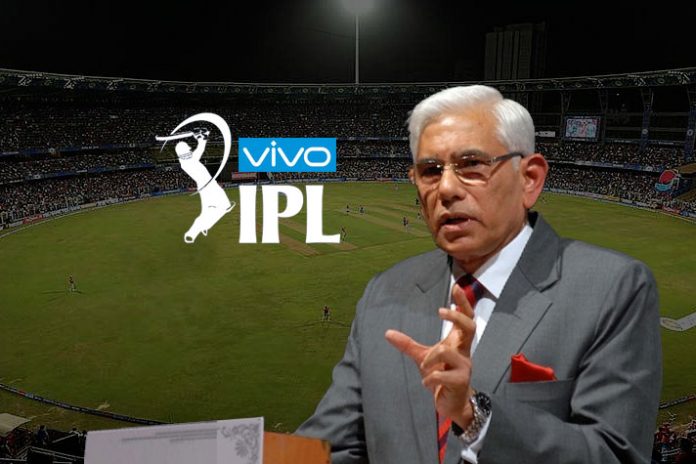 The Committee of Administrators in “yet another unilateral” decision has changed the venue and schedule of the Indian Premier League 2018 Opening Ceremony and slashed the sanctioned budget by ₹ 20 crores.

The opening ceremony, earlier scheduled for April 6 at the Cricket Club of India, will now be held at the Wankhede Stadium on April 7 hours before the season opener between defending champions Mumbai Indians and the Chennai Super Kings, returning to the IPL after a two-year suspension.

On behest of the CoA, the sanctioned budget for the IPL 2018 opening ceremony has been slash from ₹50 crore to ₹ 30 crores, national daily Indian Express has reported quoting BCCI office bearers.

Another senior BCCI office bearer, while confirming the move to insidesport.co has questioned the wisdom behind the decision to have the opening ceremony hours before the first match. “If it were only for saving those ₹20 crore, it’s better to have no opening ceremony at all. There is no point ending up wasting the other ₹30 crore with zero benefit for the game or the league,” the official told insidesport.co.

“They (the CoA) need to understand the difference between the office administration and cricket administration. The grand opening for an event of IPL’s magnitude is planned with a purpose, certain gains and the game’s operational aspects in mind,” said the official. “If you are thinking of doing the opening ceremony at the match venue hours before the match, we will strongly recommend don’t waste any money for symbolic gestures. Whatever spent on such an exercise will go down the drain with zero gains, and instead cricket will end up being the bigger loser.

“Hours before the opening game for the season, all will have their focus on the game. Captains of the four teams involved in the two ties scheduled for the next day will not be present for signing the oath. The teams playing the first game will have to compromise on their training schedule,” said the official.

The IPL Governing Council had sanctioned a budget of ₹50 crore for a grand opening ceremony to start the season with a bang. The IPL GC meeting where the decision to have a grand opening ceremony was taken had been attended the by the IPL Chairman Rajiv Shukla, BCCI acting secretary Amitabh Choudhary, acting treasurer Anirudh Chaudhary, the BCCI Chief Operations Officer Hemang Amin among others.

The IPL GC had decided to do away with last season’s practice of having symbolic inaugural entertainers ahead of the first game at the home venues for each of the eight franchisees. Instead, a ₹50 crore budget was sanctioned for one grand curtain raiser, on April 6 at the Cricket Club of India. “We had initially proposed ₹30 crore for the opening ceremony. But Hemang asked for a much bigger consideration for a grand gala opening. It was unanimously decided to raise the budget to ₹50 crore. However, Hemang was asked to ensure that the opening ceremony should be distinct from the Bollywood awards nights,” the official said.

“Now, if you have to do it before the first match then even ₹30 crore is way too high an amount. Why do you need ₹30 crore? The opening, no matter how big you plan, can’t be anything more than a token celebration hours before the match is about to start at the same venue.

“Why is CoA changing policy decisions. The grand ceremonies have a business model to recover the major part on your spending. There are other RoIs. CoA seems to have erred in his judgement in calculating the media value of the event. There is no other way cricket can capture massive space on entertainment pages. In an attempt to save ₹20 crore, you may end up wasting the ₹30 crore.”

The 2018 IPL opening ceremony is reportedly shifted by a day to the venue of the first match under instructions from the CoA.