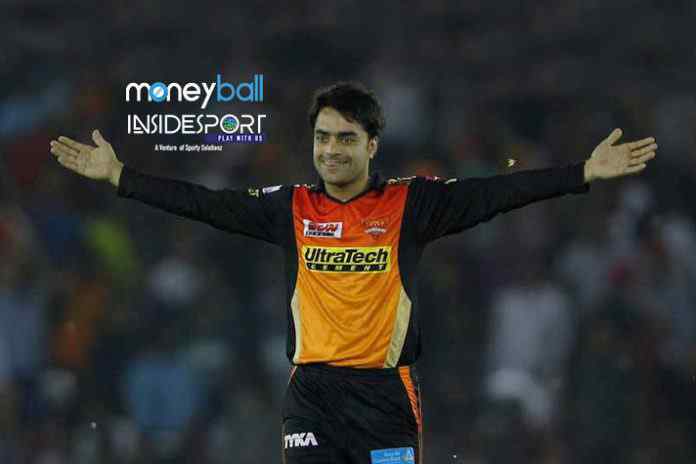 SunRisers Hyderabad have booked their well-deserved date with Chennai Super Kings for the final shot at the Indian Premier League title on Sunday, May 27.

The Afghanistan teenager, acquired by SunRisers Hyderabad for ₹9 crore on the strength of his deceptive wrist spinners, rather set up the stage for his team’s win with the willow. Not a trait he was valued for much. But for Rashid’s 10-ball 34, of which 16 came from a mere four deliveries in the last over, SunRisers were struggling to give Kolkata Knight Riders a challenging score to defend.

Rashid continued with the momentum he had wrested in the last over of the SRH innings not just with the ball but in the deep field, too. With three wickets from four overs @ 4.75 economy, two catches in the deep and a runout, he never let the KKR stay in the game.

Irrespective of his 32nd ranking in the IPL Moneyball Impact Point with 296 Impact points till date, Rashid on the strength of this one performance on Friday has proved to be SunRisers’ Hyderabad’s “best value or money” deal for the season.

This one-man show has had an impact far beyond the boundaries of the Gardens of Eden and the City of Joy, Kolkata.

No overnight sensation is Rashid Khan. He is a proven professional – from Big Bash in Australia to the biggest stage of IPL. But this one from Sachin Tendulkar will be among the choicest of laurels, the Afghan teen has earned in his career. “Always felt @rashidkhan_19 was a good spinner but now I wouldn’t hesitate in saying he is the best spinner in the world in this format. Mind you, he’s got some batting skills as well. Great guy..,” tweeted the Master Blaster.

Always felt @rashidkhan_19 was a good spinner but now I wouldn’t hesitate in saying he is the best spinner in the world in this format. Mind you, he’s got some batting skills as well. Great guy.

The cricket crazy Indians want to own this outstanding Afghan talent. As this Afghan Sun rose for the Hyderabad IPL team, crazy fans across the country but also led to several calling for an Indian citizenship for the Afghan star.

Minister of External Affairs of India, Sushma Swaraj acknowledged and responded to cricket lovers emotional call. Her reaction though was laden with wit. “I have seen all the tweets. Citizenship matters are dealt with by Ministry of Home affairs,” Swaraj wrote on Twitter

Rashid for his rare show with the bat, ball and in the deep field was deservingly awarded the man of the match. On one of the best days of his professional career for his best performances, Khan was ecstatic. But not without an agony for the human lives lost in a terrorist attack back home. He dedicated his best performance and the award to the departed souls. “Want to dedicate my award to those people who lost their lives in a blast back home,” said the 19-year-old.

Sunday will be another big day for SunRisers Hyderabad. Chennai Super Kings are a might opposition. The Grand Finale to decide the IPL 2018 Champions will aptly have the two top performers against each other day. For Khan, it will be the day to live up to his latest-found reputation.