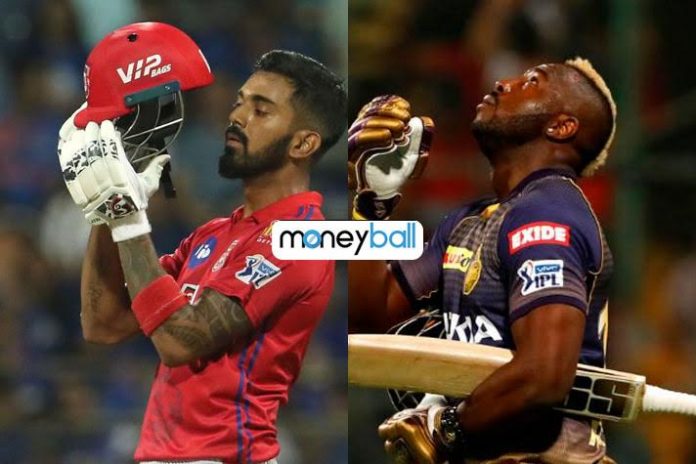 Andre Russell, the Kolkata Knight Riders game changer, has also been the most impactful player of the Indian Premier League (IPL) 2019 with his all-round show in the third week. The Caribbean with his blitzkrieg impactful, game changing knocks and heroics with the ball  has pushed last week’s leader David Warner to the second position.

Russell in seven games so far has accumulated 306 runs and taken six wickets to notch up 369 points in the IPL 2019 Impact Index. Warner with 352 points for his 349 runs and a catch is placed second. As the Australian has played a game less than Russell’s seven so far, he stands a chance to regain his top spot when SunRisers Hyderabad host Delhi Capitals tomorrow (Sunday).

KL Rahul, as the leading Indian on the IPL 2019 Moneyball Impact Index chart, is placed overall third following his new-found form. The Kings XI Punjab wicketkeeper-batsman to his credit has 335 points and stays in the hunt for the top spot. Inconsistency and failures to convert impressive starts into long innings of substance have forced Rishabh Pant down to the fifth spot from the third last week as he remains second most impactful among the Indian players.

Rahul in each of his past three innings has surpassed the half-century mark – including an unbeaten century against Mumbai Indians on Wednesday last, not out 71 in the winning cause against SunRisers Hyderabad and a 55 even as Chennai Super Kings had prevailed over the Kings XI Punjab.

The KXIP are pitted against winless Royal Challengers Bangalore and Rahul remains a contender for the top spot. He merely needs 34 impact points (one for each run and three for each catch, stumping or run out) to surge ahead of table topper Russell. A mere 33 runs may also hand him the Orange Cap for being the league’s top scorer.

If KKR are placed among the top two teams on the IPL 2019 points table, Russell has been the decisive factor in his team’s remarkable success, pulling off wins from the jaws of defeats to hand the Knights four wins off their seven games so far.

However, table topper Chennai’s success is a result of the combined team effort where no single player stands out to be even among the top five in the IPL Moneyball Impact Index. Still, the team continues to be the table topper with six wins from seven outings.