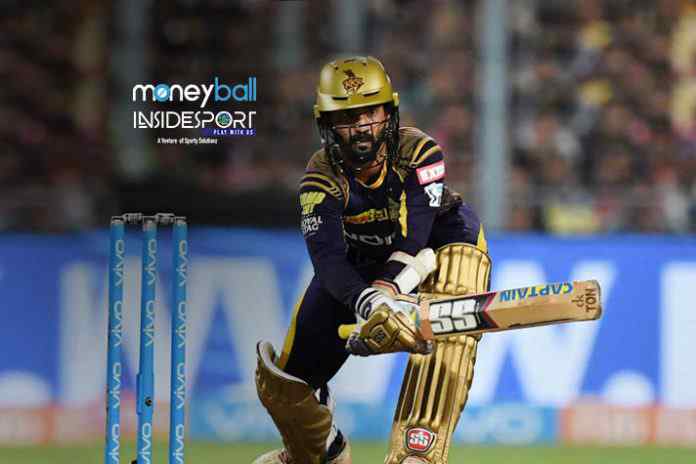 Dinesh Karthik is doing it for the Kolkata Knight Riders what Mahendra Singh Dhoni does for the Chennai Super Kings – leading the team from the front. The results if not the same are quite similar.

Chennai Super Kings are the first team to make it to the Indian Premier League 2018 final. Kolkata Knight Riders with four successive wins have booked themselves for the second eliminator on Friday, May 25. A win over in-form Surisers Hyderabad can book the Shahrukh Khan-co-owned team a date with CSK for the IPL title.

Karthik is also the best KKR player for his 8th IPL Moneyball Impact Points ranking. Like Dhoni, Karthik has excelled in his three assigned roles for the teak – as the team leader, behind the stumps and with the bat. In addition to 490 runs in 14 outings; 13 catches, three stumping and a run out give him 541 Impact points.

The seasoned wicketkeeper-batsman, who replaced Gautam Gambhir as the KKR skipper this year, has literally driven the team by setting high examples. Unlike Dhoni who has performed consistently in a strong batting line-up dominated by Ambati Rayudu, Shane Watson and Suresh Raina; Karthik has shown the way to the likes of Robin Uthappa, Chris Lynn, Sunil Narine and Andre Russel.

Like Dhoni, Karthik has time and again pulled out his team to live another day in the league. Chips were down in the first eliminator on Wednesday, May 23, when KKR had lost their top four batsmen for a paltry 51 in chase of a 170 run target. Karthik stayed firm to drive the Knight out of the woods. The team is a win away from the Grand Finale. Saying goes “the Team wins” if KKR are winning as a team – Karthik is writing that victory plot.