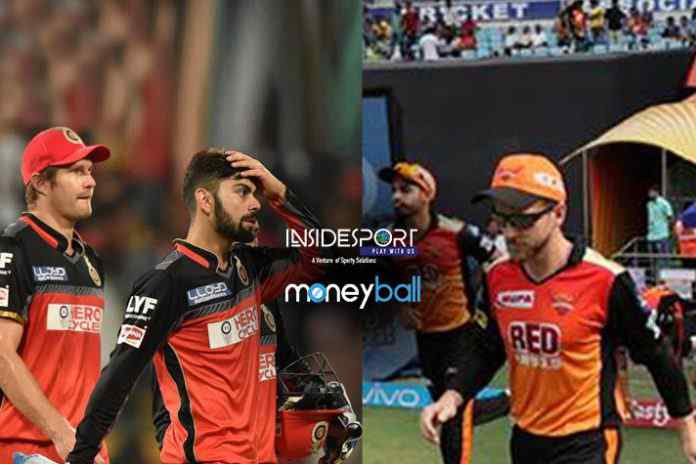 Big spending on big stars not necessarily mean a big success in the cash rich Indian Premier League. The IPL for its riches and money power has often been termed as the Indian “Paisa” (Money) League. Insidesport Moneyball analytics provide a contradictory view. The money or icons are not the sole deciding factors in cricket world’s richest professional competition.

Indian Premier League has a history loaded with many big-money deals failing to justify their price tags and lesser known recruits emerging as the match winners and game changers. In this bazar of cricket, the money and goodwill do not guarantee a certain success.

The respective positions of SunRisers Hyderabad and tournament’s highest-valued combine Royal Challengers Bangalore in IPL Points Table is a perfect case study for a thesis to support that “big spending, big stars are no guarantee to big success” in the world of commercial sports.

Royal Challengers Bangalore, the most expensive and top-ranked combination on the IPL Moneyball table for 2018, are languishing at the sixth position in the tournament points table – struggling to avoid an elimination before the playoffs. RCB, who have retained Virat Kohli for IPL’s highest ever ₹17 crore deal, will be spending ₹79,65,00,000 on their total salaries this season.

Sunrisers Hyderabad placed sixth on the IPL Moneyball team ranking for 2018 with a total salary bill of ₹67,85,00,000, is the league leader with eight wins from their 10 games. The Kane Williamson-led side is almost assured of a place in the next round with four more games to go. The Hyderabad combine has started their IPL campaign on a low note as their designated skipper David Warner had to be forced out of league after his national cricket board – Cricket Australia – had imposed a one year ban on him. Led by Kiwi Williamson, who might have struggled for a regular place in the XI if Warner were around, the team has upset all calculations.