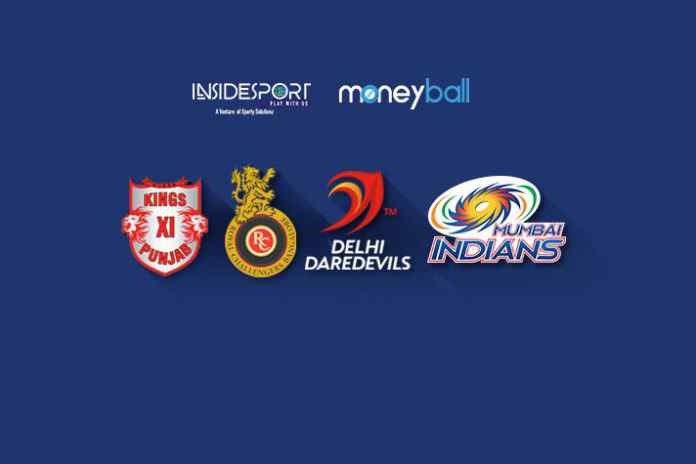 Indian Premier League is well past its first major milestone.

Defending Champions Mumbai are out – eliminated with a shock defeat in their last league tie against the bottom-placed Delhi Daredevils. In the scenario to be decided by averages and net run rate Mumbai Indians needed just a win to cruise through. They failed – let down by their big investments, top players and big names. The team needed skipper Rohit Sharma and Kieron Pollard to deliver in a 174-run chase. Both failed as they have done in most games this season.

Rohit, for his ₹15 crore retention deal and to set an example as the captain, turned out to be an anti-climax for all good reasons and at all good occasions. In 14 outings, he produced a mere 286 runs. On IPL Moneyball Value for Money Rank, a 121st position is a big let-down for the seasoned campaigner. Pollard, acquired by the Mumbai Indias fo ₹5.4 crore, could neither justify his salary, nor his reputation as a T20 professional. A mere 133 runs in 14 outings is not the stuff for a team to pledge ₹5 crore on a tried and trusted name. A big hope for MI was Bangladesh tearaway Mustafizur Rahman too. Again, the youngster neither lived up to his reputation nor the ₹2.2 crore investment on his.

The result: the defending champions were eliminated at the first exit window in the tournament. 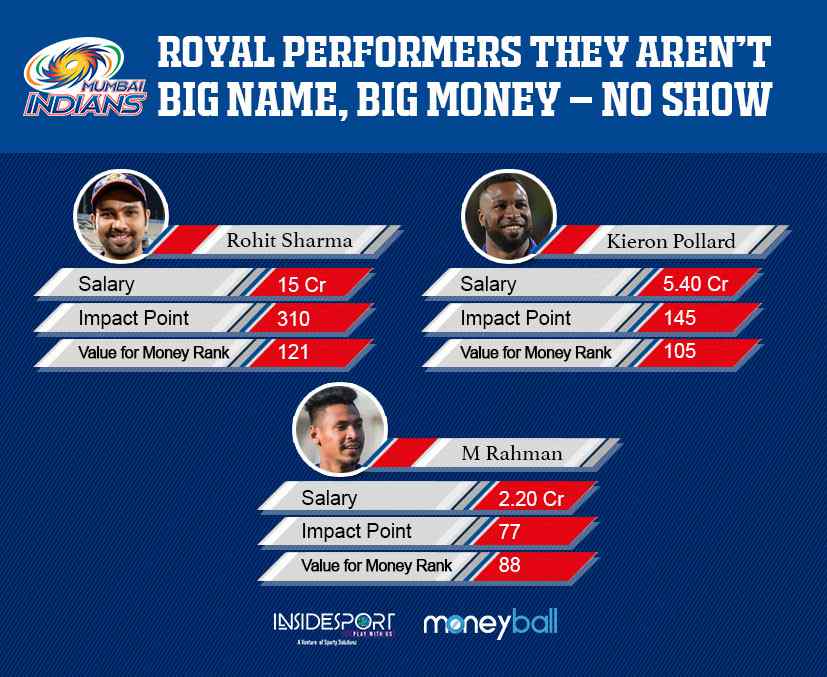 The cause of the Royal Challengers Bangalore’s elimination is in sharp contrast to the Mumbai Indians’ failure. The top guns fired with the bat, but the Bengaluru team is disappointed by its best bowling options. Englishman Chris Woakes for his ₹7.4 crore salary ended up with a mere eight wickets and 103 Moneyball Impact points in 14 outings.

Yuzvendra Chahal had returned from India’s tour of South Africa with a big reputation and hope for the future. He failed to hold on to that hope. The reputation and the team stand dented now. The ₹6 crore acquisition played all the 14 league games for 12 wickets and 126 Impact Point. Washington Sundar, the young wicketkeeper-batsman, was also not up to his top billing. RCB certainly deserved a better deal for its ₹3.2 investment on the youngster, who ended up with a mere 1.5 impact points. 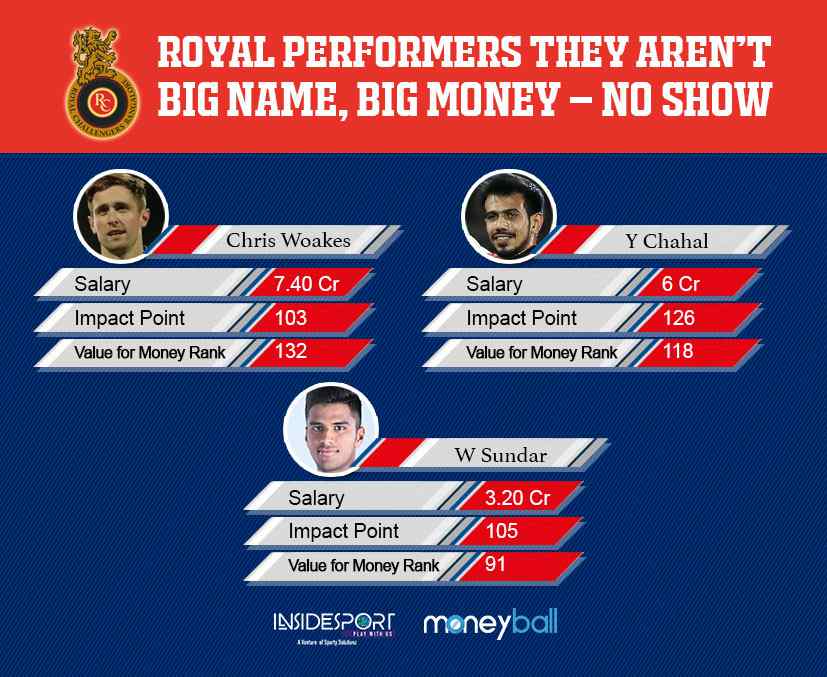 The Kings XI Punjab were off the blocks with a bang. Winning matches one after another, keeping the aggression set by team co-owner Preity Zinta in the player auction hall alive. But as the game progresses and the team looked almost assured of a place in the playoff, down came the failure with uneasy consistency in KXIP’s top players that drove the team to a situation where they needed a big win to enter the next round. KXIP failed again.

Teams only retained player Axar Patel, once the master craftsman of the T20 trade Yuvraj Singh, top imports Marcus Stoinis, David Miller and Chris Gayle all failed when it mattered the most. The failures did matter the most in KXIP’s disappointing elimination.

Yuvraj for his fitness, health and age seems to have played his last IPL game. 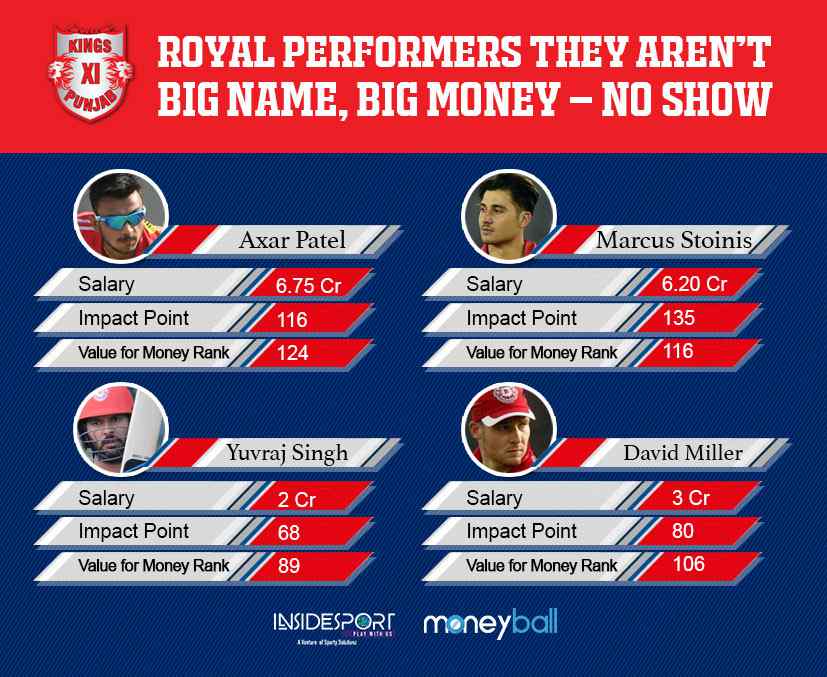 Delhi Daredevils story is a story of consistency in performances and non-performances. There were consistent players like the tournament top scorer Rishabh Pant (684 runs from 14 games) and stand-in skipper Shreyas Iyer (411 runs, 14 matches). Then there were the likes of Glenn Maxwell, the big ₹9 crore acquisition, and seasoned pro Amit Mishra (₹4 crore). An early exit of injured Chris Morris further complicated the matter for the team.

If only Maxwell (14 matches, 169 runs, 5 wickets, and 221 impact Points) and Amit Mishra (13 matches, 11 wickets) could have managed have managed to translate their potential and billing into performance Delhi Daredevils were a different story altogether in IPL 2018. 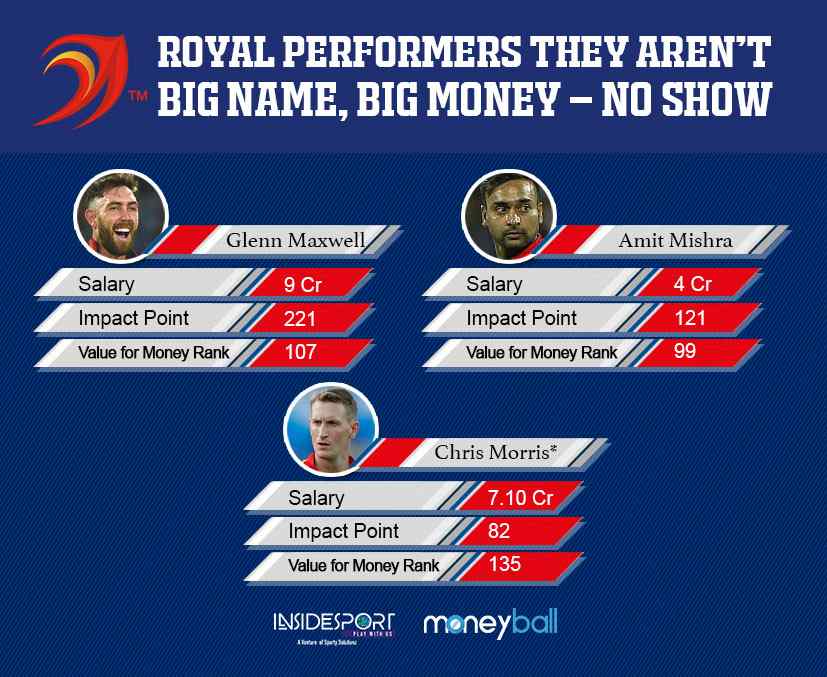