IPL on Hotstar sets world record; TV ratings too on a high 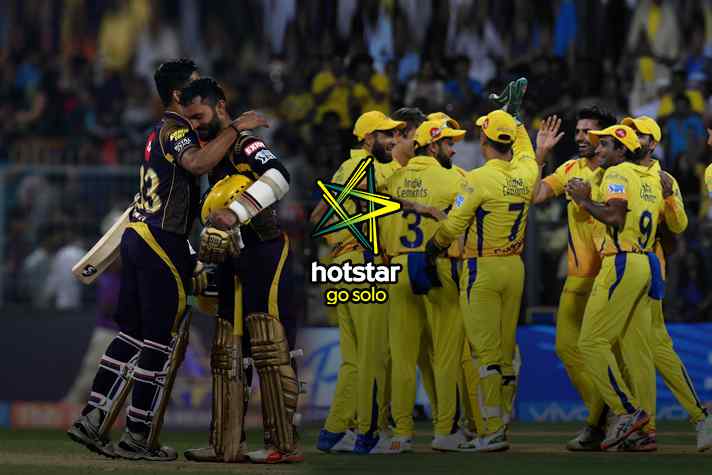 The Indian Premier League match between the Chennai Super Kings and the Kolkata Knight Riders has created a world record for concurrent viewership on any streaming platform.

The Star India-backed OTT platform Hotstar has advertised the feat in a big manner, publishing full-page advertisements for the 55 lakh concurrent viewership during the Chennai-Kolkata IPL 2018 game. The number for the largest ever simultaneous viewership of a sports event online is verified by Akamai Technologies, the world’s largest and most trusted cloud delivery platform.

Riding high on the success of IPL’s maiden simulcast on Hotstar, Star India is also gearing up for more celebrations for the television broadcast numbers, which for Day One of the IPL 2018, are believed to be 40-50% higher than the 2017 IPL season opener on Sony network channels.

Star Sports is charting out a major marketing drive over the unprecedented ratings of the Mumbai Indians–Chennai Super Kings tie at the Wankhede Stadium on Saturday, April 7. The consolidated IPL numbers have received a big boost from Star Sports’ regional broadcast strategy. Star Sports, targeting a consolidated 700 million viewers for IPL 2018, is broadcasting the league action in six languages across the 10 network channels and Hotstar.

The unprecedented viewership ratings will also give Star Sports sponsorship sales a major boost. The broadcaster, just shy of the ₹ 2,000 crore IPL ad sales target, has as of now sold more than 90% of the total IPL ad sales inventories. With the never before broadcast and streaming ratings, the spot sales of the unsold 7 to 8% inventory is expected to generate lucrative premiums for the broadcaster.

Viewership for the game between the KKR and CSK on April 10 has peaked at 5.5 million concurrent viewers, the IPL broadcaster has stated in a media release.

This is the largest on the Akamai platform for any live sporting event in the world and the largest for any single event online by a broadcaster. This is ahead of the previous high on the Akamai platform of 4.8 million peak concurrent users, established by Hotstar during the India and Pakistan ICC Champions Trophy Final in June 2017. The concurrent viewership of IPL on Hotstar exceeded the peak viewership of 4.6 million for the streaming of the inauguration of US President Donald Trump in January 2017.

“Crossing 5 million on a live sporting event is like breaking the 10-second barrier in the 100 meter dash. We are proud that we are the first to get here. But, of even more importance, we are excited that fans have embraced the immersive sports experience on Hotstar that has brought together live streaming, the expression of fan emotions and an interactive always-on game. This is the future of video online and we are excited to shape it. At this scale, we will be clearly testing the ability of different parts of the Internet to keep up with the dramatic growth in fan followership. And, we are delighted that Akamai has been a partner that has always walked in step with our ambitions and delivered the scale that we seek,” said Ajit Mohan, CEO, Hotstar.

“Hotstar is one of the pioneers in the live streaming industry in India, and has changed the way hundreds of millions of people consume content. With the hyper growth of mobile-first users, it’s important that platforms catering to them factor in the right technology to provide an experience that rivals, if not supersedes, a traditional broadcast experience. Akamai’s partnership with Hotstar has changed how people enjoy a variety of content ranging from general entertainment to live sports anytime, anywhere and on any device,” said Parimal Pandya, Vice President, Media, APJ, Akamai Technologies.

The tournament is streaming live on Hotstar in six languages – Tamil, Telugu, Bengali, Kannada, Hindi and English – while Star Spots is broadcasting the action on ten channels, including the regional platforms.