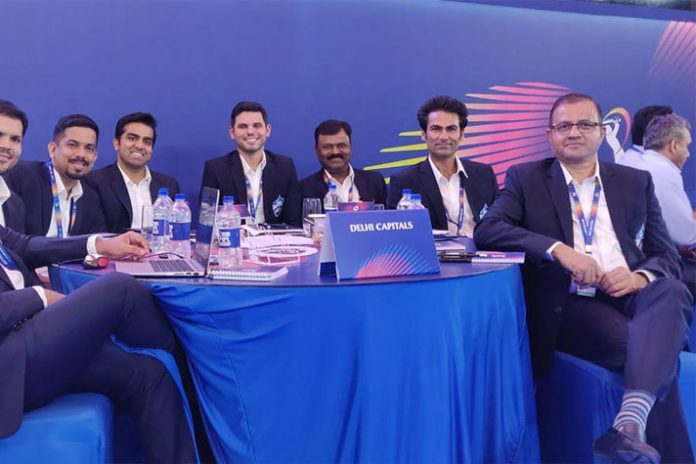 JSW and GMR co-owned Delhi Capitals acquired exciting overseas players in the initial phase of the Indian Premier League 2020 Auction held in Kolkata. World Cup-winning duo of Jason Roy and Chris Woakes were bought by the Delhi-based franchise for a base price of ₹1.50 crores each, with flamboyant West Indian batsman Shimron Hetmyer being their most expensive buy of the Auction at ₹7.75 crores. Delhi Capitals also bought Australian wicket-keeper batsman Alex Carey for a price of ₹2.4 crores.

Speaking on his team’s four major buys in the IPL 2020 Auction, co-owner Parth Jindal said he is pleased with the business his side has done so far. “It has been a very dynamic, yet a super exciting Auction for the Delhi Capitals. We were pleasantly surprised to get Chris Woakes and Jason Roy for INR 1.5 crores each, and then getting a player like Shimron Hetmyer was the icing on the cake. We also managed to get Alex Carey, who is a really exciting prospect for us. With Roy, the good part was that he has played for Delhi before, and we felt that he has really developed in the last couple of years, and along with Hetmyer, he could be the x-factor for us at the top of the order,” said Jindal.

“We now have plenty of batting options and there’s enough players to choose from for Ricky, depending on their form and fitness along with the playing conditions. I think we still have some work to do in the Auction when it comes to the bowling department and that will be our focus in the last segment,” he added.

The first buy of the Auction for Delhi Capitals was England’s opening batsman Jason Roy who was purchased for ₹ 1.5 crores. The 29-year-old has previously represented Gujarat Lions and Delhi Daredevils in the IPL in 2017 and 2018 respectively, but did not participate in the 2019 edition of the tournament. During his IPL career, the destructive opening batsman has played a total of eight matches, scoring 179 runs at a strike-rate of 133.58.

Roy’s compatriot Chris Woakes was also bought by the Capitals in the Auction for his base price of ₹ 1.5 crores. The experienced fast bowler has previously represented Kolkata Knight Riders and Royal Challengers Bangalore in 2017 and 2018 respectively, with the 2017 edition proving to be a great season for Woakes as he picked up 17 wickets in 13 matches at an economy of 8.77. In all, the 30-year-old has played 18 matches in his IPL career, picking up 25 wickets at an economy of 9.24.

Delhi Capitals’ Assistant Coach Mohammad Kaif spoke on his team buying Woakes. “Initially we thought he would cost a lot of money in the Auction, but we were all surprised that we got him at a great price. He has been a regular fixture in the England squad, and brings with himself a lot of experience which shall help us in the upcoming season. He has also performed in India during his two years in the IPL, and I believe with Rabada, Ishant and him in the team, it will provide us with some great options,” he said.

Australia’s Alex Carey was also picked up by the Delhi Capitals at a price of ₹ 2.4 crores. The Aussie was involved in a two-way battle between the Rajasthan Royals and Royal Challengers Bangalore, but was snapped up by the Delhi franchise. The wicket-keeper batsman made his debut for the Australian team in 2018, and has since also played in the ICC Cricket World Cup held earlier this year, and will be taking part in his first-ever IPL.

Shimron Hetmyer, who has been troubling the Indian bowlers in the current ODI series, was also snapped up by the Delhi Capitals for a price of ₹ 7.75 crores after a battle with Rajasthan and Kolkata. The 22-year-old has played a total of five IPL matches for the Bangalore franchise in the 2019 season, scoring 90 runs. However, his current form and exceptional performances in the recent months saw him attract attention in the IPL Auction.