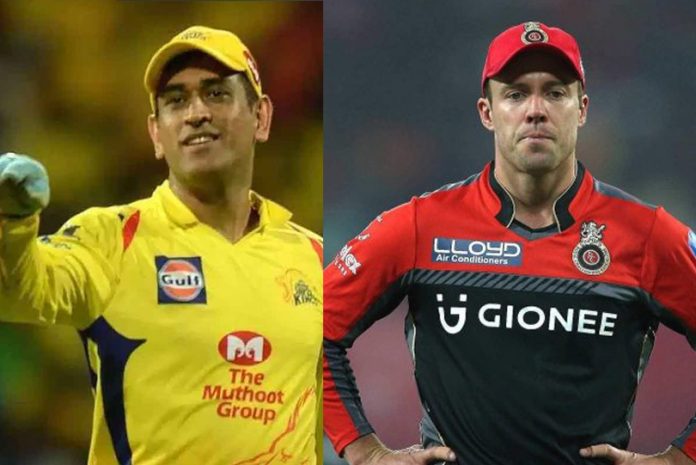 For Royal Challengers Bengaluru’s AB De Villiers, instead of his team mate Virat Kohli, MS Dhoni of CSK would lead his IPL all time XI.

De Villiers, who plays under Virat Kohli at Royal Challengers Bangalore, also picked his skipper and himself in the XI.

IPL All time XI selected by AB De Villiers
AB de Villiers’ all-time IPL XI: MS Dhoni (captain), Virender Sehwag, Rohit Sharma, Virat Kohli, AB de Villiers, Ben Stokes, Ravindra Jadeja, Rashid Khan, Bhuvneshwar Kumar, Kagiso Rabada, Jasprit Bumrah.
De Villiers picked his former captain during his stint with Delhi Daredevils, Virender Sehwag as the opener of his side along with Rohit Sharma, whom he described as someone who has been playing ‘the best cricket in the world over the last 5 years’.
“Opening the batting, someone I started with at Delhi — Viru. And then someone who I think has played the best cricket in the world over the last five years – Rohit. Virat is at No. 3. No. 4 either Williamson or Smith or myself,” AB de Villiers said during Cricbuzz in Conversation show with sports presenter Harsha Bhogle.
At 3rd and 4th the former South African captain picked himself and India captain Virat Kohli while England all-rounder Ben Stokes now ready to lead England team in Tests for the first time, was picked at No. 5.
Dhoni, who has led CSK to 3 IPL titles, comes at No. 6 in de Villiers’ all-time XI while his CSK teammate Ravindra Jadeja takes up the second all-rounder’s slot.
Rashid Khan handles the spin department along with Jadeja while Bhuvneshwar Kumar, Jasprit Bumrah and Kagiso Rabada are the 3 pacers in de Villiers’ all-time XI.
Also Read: IPL 2020 : Star India’s Uday Shankar on IPL 2020, “We are preparing, but…