By Sreehari Menon
05/02/2022
Share
Facebook
Twitter
Pinterest
WhatsApp
- Advertisement -
IPL 2022 LIVE Updates – Kuldeep Yadav’s resurgence has been one of the stories of the IPL with the chinaman bowler returning to top form after years in the wilderness. Kuldeep is one of the leading contenders for the purple cap this season and already has four player of the match awards to his name prompting calls for his comeback to the Indian team. Kuldeep’s return to form has coincided with the change in leadership of team India, with his childhood coach crediting new captain Rohit Sharma for instilling that confidence into the spinner. Follow IPL 2022 live updates on Insidesport.in
IPL 2022 Points Table / IPL 2022 Orange Cap / IPL 2022 Purple Cap / IPL 2022 Full Schedule / IPL 2022 Most FOURS / IPL 2022 Most SIXES
IPL 2022: Kuldeep Yadav’s COACH accuse Virat Kohli ‘Axar Patel was his preference, Credit to Rohit Sharma for again trusting him’ 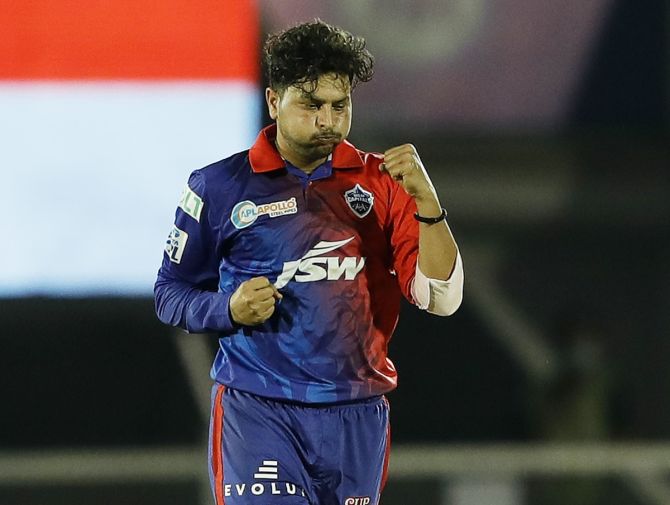 Kuldeep Yadav’s childhood coach Kapil Dev Pandey believes that the chinaman bowler has thrived at Delhi Capitals while also praising new Indian captain Rohit Sharma for elevating his confidence. Pandey further revealed that Rohit kept an eye out for Kuldeep even during his rough days and kept him motivated to make a return to the side.

In an interview with the Times of India, Kuldeep’s coach Kapil Dev Pandey said that the spinner should be thankful that KKR released him after they failed to manage him properly. He said further stated that under captain Virat Kohli, Kuldeep was shunned for Axar Patel, but Rohit has instilled back his confidence.

He said, “Whenever captains trusted him, Kuldeep delivered. He has a good record in Tests. He has two hat-tricks in ODIs. He has a good T20I record. But still, he didn’t get enough opportunities. This is really shocking. Kuldeep’s career is protected because of Rohit Sharma. Rohit is the man behind Kuldeep’s resurgence. He is a fantastic captain and he knows how to find talent in a big group of players.”

He added,  “Ahead of the IPL, Rohit called Kuldeep and gave him the chance (against the West Indies). Kuldeep delivered too by taking two wickets. Rohit kept a close eye on Kuldeep, his Yo-Yo Test and rehab reports. Rohit was impressed with Kuldeep’s rehab programme. Rohit should be credited for Kuldeep’s comeback.”

He added, “Kuldeep wouldn’t have been here today without the support of Rohit, Pant and Ponting. Every captain has their own style of captaining and picking players. Kuldeep played a lot of cricket under Virat. Virat wants experience in the side. He went with Ashwin and Jadeja. He preferred Axar ahead of Kuldeep because of Axar’s batting capabilities. A captain has to trust his players.”

Kuldeep missed out on the last season due to injury and was sparingly used by KKR in the two seasons before that. Now in a renaissance of sorts, the left-arm leg spinner has picked up 17 wickets in nine games and is only behind Yuzvendra Chahal in the purple cap race after Delhi Capitals picked him up for his base price of Rs 2 crore.

“Kuldeep is so thankful to Delhi Capitals for giving him this opportunity. Delhi showed faith in him and Kuldeep is repaying that faith. Kuldeep needs mental support and he got that from (Rishabh) Pant and (Ricky) Ponting. Ponting and Pant have asked Kuldeep to go and express himself in the middle and Kuldeep is doing just that. Kuldeep has the full support of Ponting and Pant. When the captain and coach back you, what else do you need?” Pandey further said.

“Pant is doing what Dhoni used to do with Kuldeep. Pant is guiding Kuldeep the way Dhoni did. Pant has shown a lot of trust in Kuldeep. He is guiding him from behind the stumps, instructing him. Kuldeep and Pant have great coordination on the field. They are on the same page about most things. Kuldeep worked a lot on his lines and lengths. He is not giving room to batsmen now. He is bowling with full confidence,” Kuldeep’s childhood coach further said.