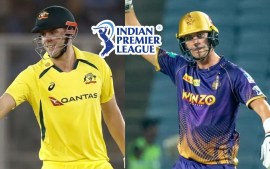 IPL 2021 suspended: As the BCCI and IPL Governing Council decided to suspend IPL 2021 with immediate effect due to the rising…

By  Kunal Dhyani May 4

IPL 2021 suspended: As the BCCI and IPL Governing Council decided to suspend IPL 2021 with immediate effect due to the rising number of COVID-19 cases in IPL’s pristine bio-bubble, it has put Australian players at crossroads. As the Australian government has banned any traveller from India until May 15, the Aussie players and support staff like Pat Cummins, Steve Smith, Glenn Maxwell, Ricky Ponting and Simon Katich won’t be able to go back to their country. Furthermore, with the COVID-19 situation in India spiralling out of control, they don’t feel safe in the country either. Hence, many players have decided to follow countryman Michael Slater, who is one of the commentators, to the Maldives.

As per the Australian government’s guidelines, no one including its own citizens are permitted to return to the land down under due to the risk of spreading the disease in the country. Hence, the stranded players have no other option but to take refuge in the Maldives until the travel restriction is eased or a solution is reached with Cricket Australia or the government.

However, Michael Slater wasn’t happy with the situation and blasted Australian Prime Minister Scott Morrison for restricting its own citizens from returning to Australia with a hefty fine and even prison sentence.

If our Government cared for the safety of Aussies they would allow us to get home. It’s a disgrace!! Blood on your hands PM. How dare you treat us like this. How about you sort out quarantine system. I had government permission to work on the IPL but I now have government neglect

And for those who think this is a money exercise. Well forget it. This is what I do for a living and I have not made a penny having left early. So please stop the abuse and think of the thousands dying in India each day. It’s called empathy. If only our government had some!

IPL 2021 suspended: Earlier, Australian players such as Andrew Tye (Rajasthan Royals), Kane Richardson and Adam Zampa (Royal Challengers Bangalore) returned to Australia before the travel restrictions were imposed. They moved through Dubai to reach Australia, where they are serving a 14-day quarantine period. Currently, there are nearly 40 Australians in IPL bio-bubbles including players, coaching staff and commentators.

Another Aussie player Dan Christian (RCB), who was supposed to go to the UK directly to play in the T20 blast, will also have to be in India or move to a country where it is relatively safer. Dubai was an option but now that the UAE has also banned flights from India, it is not possible for him to take that either. Pat Cummins said many players were anxious after Australia decided to shut its borders.

“As soon as the hard border shut, obviously no one has experienced that before. It added a bit of anxiety for a few of the Aussies over here. But we signed up to play the tournament until the start of June. Hopefully, it all reopens on May 15 and we’ll be able to get back,” Pat Cummins told Fox Sports’ The Back Page before BCCI suspended the IPL 2021.

“Think we are all hoping we can get home like we would normally plan and the borders open on May 15, whether it’s a private flight or not we wouldn’t be allowed back at the moment. Cricket Australia have been brilliant along with the ACA, they are working closely with the government to get the latest information, if we can’t get home it won’t be for lack of trying from all those involved,” Pat Cummins added.

Also Read: IPL 2021 Suspended: Foreign players clueless and worried, asks franchises ‘how will we go back to home’

IPL 2021 suspended: Nick Hockley, CA’s interim chief executive, said he had a meeting with Australian Cricketers’ Association CEO Todd Greenberg to seek clarity on the situation. In the meantime, the BCCI said that it would be working with the players and respective franchises to find the best and safest route for their return.

Cricket Australia and the @ACA_Players understand the decision of the BCCI to indefinitely postpone the 2021 Indian Premier League for the safety and wellbeing of all participants. pic.twitter.com/M612hrnZFo

However, unlike Australian players, New Zealand cricketers could return home with the government recently lifting the travel ban. However, there are only a few flights that are accepting passengers. Furthermore, players like Kane Williamson, Trent Boult and others will need to undergo a mandatory 14-day quarantine. New Zealand Cricket said it was reaching out to different authorities to find an amicable solution.

“NZC remains in contact with the New Zealand contingent in the Indian Premier League. The players are in a relatively safe environment and those within affected teams are in isolation. We’ll continue to liaise with the BCCI, the ECB and New Zealand government authorities in terms of managing their situation – but at this juncture, it’s too early to discuss potential options,” NZC said in a statement.