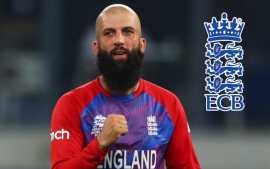 IPL 2021 – Moeen Ali says no to wearing CSK jersey 2021: England all-rounder Moeen Ali has said no to wearing a CSK jersey due to alcohol brand logo on it. The 33-year-old is a devout Muslim and his religion forbids him from consuming alcohol. He does not support alcohol brand logos, be it on his England kit or any other domestic team he is part of.

The MS Dhoni-led Chennai Super Kings jersey has the logo of SNJ 10000, which is a product of Chennai-based SNJ Distilleries. The CSK management has reportedly agreed to Ali’s request and removed the logo from his match jersey.

Dhoni had unveiled the team’s new jersey for IPL 2021. The former India captain, in a video shared by the franchise, unboxed the jersey to share its first glimpse with fans and followers.

ALSO READ| Can Suresh Raina retain his ‘Mr. IPL’ form for CSK even with just a week’s training?

CSK have certainly come up with a revamped look for their jersey as it is featuring a new camouflage design on the shoulders. The camouflage design is a tribute to the Indian armed forces. CSK have done away with the red and blue stripes near the shoulders. MS Dhoni, who is an honorary Lieutenant Colonel with the Territorial Army, will be sporting the new jersey as he will lead the side in IPL 2021, starting April 9.

“The new-look jersey features camouflage as a tribute to India’s armed forces and three stars atop the much-loved franchise’s logo,” CSK said in a statement.

“It has been on our mind for some time now to find ways to raise awareness about the significant and selfless role of the armed forces. The camouflage is an appreciation of their service they are the true heroes,” CSK CEO KS Viswanathan said.

Chennai bought Ali for a whopping Rs 7 crore from Royal Challengers Bangalore (RCB) at the IPL 2021 auction held in February. He has played 19 IPL matches so far, scoring 309 runs and picked 10 wickets. Last month Ali expressed his excitement at playing under former India captain MS Dhoni at CSK this season.

“I’ve spoken to players who have played under MS and they tell me how he improves their game. I believe a great captain does that,” Moeen was quoted as saying by the CSK website.

“I think it’s something on every player’s wish list to play under MS. I think it’s the confidence and the clarity he gives people. It’s exciting,” he added.

Three-time champions Chennai Super Kings will be opening their IPL 2021 campaign against Rishabh Pant’s Delhi Capitals on April 10 at the Wankhede stadium in Mumbai.

CSK vs Delhi Capitals (DC) will be played on April 10 at 7:30 pm in Wankhede Stadium, Mumbai behind closed doors.