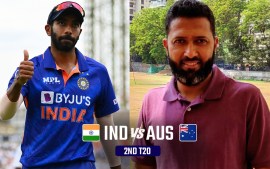 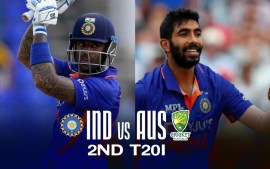 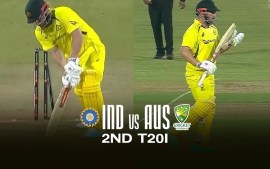 IPL 2021: From Candice Warner to Sanjana Ganeshan, 5 IPL stars wives who have taken commentary roles- The Indian Premier League features some of the biggest stars from a number of countries including local heroes. But, today we are not talking about them instead we’ll discuss about their wives who have taken commentary/ TV anchoring roles. Some of these names are Candice Warner (wife of David Warner), Sanjana Ganeshan (Jasprit Bumrah), Erin Holland (Ben Cutting), Mayanti Langer Binny (Stuart Binny), and Lee Furlong (Shane Watson).

David Warner’s wife Candice Warner is a retired Australian professional ironwomen who has appeared in a number of TV shows since 2008. She recently signed a L’Oreal deal as an ambassador and will be part of Channel Seven’s broadcast for the upcoming Tokyo Olympics.

“I’ll be doing the commentary for the men’s and women’s triathlons and the open water swimming,” she told 7news.com.au

“I’m super excited because sport is my first love,” she added.

Wife of India pace spearhead Jasprit Bumrah, Sanjana Ganeshan is a Star Sports broadcaster. She covers live cricket matches, including IPL and Badminton tournaments. The couple is the latest on the list as they tied the knot a few months ago ahead of IPL 2021. She recently hosted the ICC World Cup 2019 in England and Wales.

Ben Cutting’s wife Erin Holland hosts cricket matches for Sony Sports India. She has also covered the Indian Premier League. Besides this, she appears on a number of TV channels in Australia. Above all, she is the brand ambassador of Qatar Airways. It is notable that Erin Holland had won the Miss World Australia title in 2013.

She is the wife of former IPL player Stuart Binny. She has appeared in a number of cricket shows for Star Sports over a decade, including the 2018 IPL edition which the first to get covered by Star Sports after it won the bidding rights for the cash-rich league. She has hosted a 2011 World Cup, Champions Trophies, Asia Cup, and a number of bilateral cricket tournaments.

Another former IPL cricketer’s Shane Watson’s wife Lee Furlong is famous for being the first female sports presenter in Australia. She began news reading at Fox Sports News channel in 2016 and has hosted famous shows such as ‘Cricket Superstars’, ‘Football Susperstars’, and international tennis tournaments. Besides this, she is also an entrepreneur and writer.

For more sports news and IPL 2021 latest updates, follow us at insidesport.co