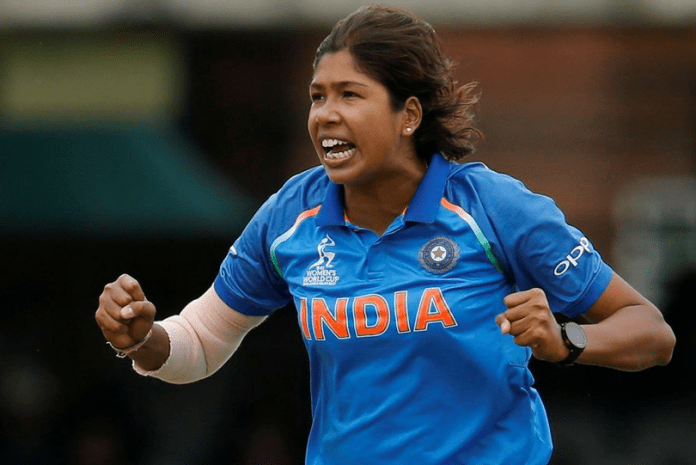 The Indian fast bowling legend aged 37 now, has 225 ODI wickets at an economy of just 3.28 runs per over. She believes that age is just a number and what matters the most is the passion for the sport. “As a professional athlete, you never think about age. You just go on with your passion, hard work, and love for the game. You just want to be on the ground as much as possible and that is the most satisfying factor for any athlete. And I am just enjoying myself. “

Goswami also looked back on how her journey into the world of cricket began and the commonality between her initiation to the game and Master Blaster Sachin Tendulkar’s, where both the journeys started from being a ball boy/girl.

While speaking to Vedant Sharma, she said, “The 1997 Women’s World Cup was happening in India and I was lucky enough to get a ticket to be honest. I wasn’t 100% aware of the World Cup happening. But the West Bengal government sent across a few complimentary tickets to the girl’s school and as I was into sports I was fortunate enough to get those. My dad took me for the match as it wasn’t possible for me to travel alone to Kolkata from my village. It was my first time at the Eden garden and I was standing in front of the main gate of the Cricket Association of West Bengal and they pointed at me and said you are a ball girl.”

She further added, “It was the proudest moment of my life. You play the same sport as the boys hearing a lot of criticism and a lot of hard comments and seeing Australia and New Zealand girls playing in the final inspired me and I said that if I start playing this sport then I have to play for my country. This was the point I started to take the game seriously and decided to make my career in it.”

On being asked on SportsTiger’s “Off-the-Field” that now people even know the women players and how has the whole scenario changed, Goswami said, “Social media plays a big role in our society in modern times. Coverage was very limited back in the days but nowadays everything is organized in a proper way. You know when the Indian team is going to play, there is live streaming of the matches and they are televised as well. From 1973 when the women’s team started only on the basis of sheer passion and love for the game and what we are getting today has immensely changed and it will only keep on improving with time.”

India reached the ICC Women’s World Cup final in 2017 and Goswami was a key member of the team but it was a case of ‘so near yet so far’ for India as they fell short by nine runs.

She reminisced about her memories and regrets from the journey and said, “It was a huge achievement to play in front of a full house at Lords in the final. We started the world cup on a high note. It was an absolute team effort from the very beginning. Whether you speak about Smriti Mandhana, Mithali Raj, Ekta Bisht, Deepti Sharma, Shikha Pandey or RajeshwariGayakwad everyone had contributed. As a team, we believed and performed.”

She further said, “We reached the finals and it was the only last 10 overs where we lost the match. For the 90 overs we had dominated the match and it was only the last 10 overs of England’s bowling where we couldn’t handle the pressure. It is a pain but we have to move on. But the 2017 World Cup irrespective of everything was the year of revolution for Women’s cricket in our country. I think momentum which was required for women’s cricket was set up by us. If you look at our team’s performance in the last three years 2017-20 we have been very consistent and only lost in the final whether it is ODI or T20I.”

Goswami also followed the World Cup experience by answering the much talked about question on Women’s IPL and grassroots women’s cricket. She commented. “Our domestic structure is fantastic. We have played competitive cricket at U19, U23, and senior level. There are many girls playing good quality cricket in most parts of the country. It’s not easy to perform in domestic cricket because you don’t know who is going to win the tournament as many teams are in contention.”

She spoke about women’s IPL in an optimistic tone saying, “As far as IPL is concerned, we do wish for the full-fledged tournament should start and we are all waiting for that. Women’s IPL will be a big achievement for the country and for young cricketers as they are going to share the dressing room with top-notch Indian and international talent.”

Despite the increasing age Jhulan Goswami has been an epitome of fitness for the youngsters. The veteran medium-pacer shared her trade secrets of staying fit and said, “From the very beginning I have kept training hard. My coach told me that I need to stay fit if I want to play for a longer period of time and overcome any injury that comes along being a medium pacer. In my younger days, there were no professional trainers and physiotherapists. I was just told one thing that as much as you run you will stay fitter. So I followed that, no matter how many sprints my coach asked for I always used to make sure I do all of them. I also used to play a lot of football which also helped in shaping up my body and stamina.”

Lastly, Goswami sounded very excited about her upcoming biopic and Anushka Sharma playing her role. She said, “I am very nervous about how people are going to react. I just hope it can motivate more young kids to take up sports. I am looking forward to it.”