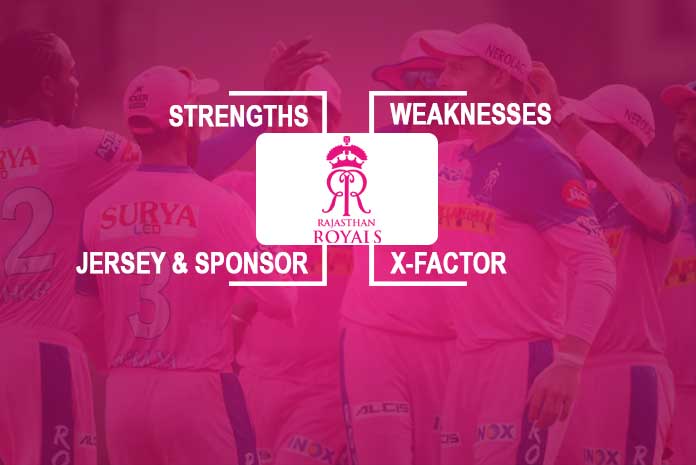 Winners of the inaugural Indian Premier League (IPL) edition in 2008, Rajasthan Royals over the years, have emerged as the team with a lower winning ratio as compared to some of the other prominent teams. While they do have three playoffs under their belt, RR never imbued the confidence of going the distance in those seasons.

In a nutshell, Rajasthan has been the team that packs a punch for small durations, and crumbles under pressure against the big names. With the IPL 2020 around the corner, there are fresh expectations and the InsideSport prediction gives their fans an overview of what to expect and what not

Rajasthan Royals have four terrific overseas players in Ben Stokes, Steve Smith, Jos Buttler and Jofra Archer. The trio of Ben Stokes, Jofra Archer, and Jos Buttler were instrumental in England’s World Cup-winning campaign in 2019. They are all potential match-winners in their own right and one of RR’s biggest strengths.

Furthermore, Ben Stokes is possibly the most complete all-rounder in the entire world and can win matches both with the bat and ball. On the other hand, it was Jos Buttler who turned things around for the team in the last season with a string of half-centuries. He is expected to star at the top of the order this season and don the gloves as well.

Although his credentials are not that celebrated in T20Is, Steve Smith remains one of the foremost batsmen in limited-overs cricket. Moreover, if the team decides to entrust the captaincy with him, it will further give a boost to the side as Smith has a pretty good idea of marshalling the troops.

The franchise has excellent depth and balance of players to do the job. Of course there would be presence of quality foreign players like Jos Buttler, Steve Smith and David Miller, but the core of the team lies in its youngsters, who would be looking to make a mark for themselves. Yashaswi Jaiswal, Riyan Parag and Kartik Tyagi — all products of U-19 World Cups, would look to perform to the best of their abilities and win some matches for their side.

Rajasthan Royals in IPL 2020: Getting the right combination would be a challenge

With ₹ 28.9 crores in their kitty, Rajasthan Royals had a busy auction and roped in as many as 11 players. Some of the biggest buys are experienced campaigner Robin Uthappa, Tom Curran, David Miller, and Andrew Tye. Jaydev Unadkat and Oshane Thomas were also bought back. Apart from these, an interesting buy for the inaugural IPL champions is 17-year-old Yashasvi Jaiswal, who was roped in for a massive ₹ 2.40 crores. That was some auction for the Rajasthan Royals!

With so many new additions in the side, getting the combination right early on would be a difficult task for the Royals. It is always good to have multiple players in the team who have played together for a few years at least. Shuffling the team so much however can backfire for Rajasthan.

The bowling of RR consists of players like Jaydev Unadkat (Rs 8.4 cr), Varun Aaron (Rs 2.4 cr) and Oshane Thomas (Rs 1.1 cr) who are capable but far from consistent. And this is what can come back to haunt the team.

Jaydev Unadkat went for over Rs 11 cr last year and had a disappointing season. Oshane Thomas and Varun Aaron are also known for their pace and not their variations. In the shortest format of the game, there is always a risk that the faster the ball comes on to the bat, the faster it flies back.

From making his debut for England to winning the ICC Cricket World Cup 2019, Jofra Archer has had an incredible 2019. The Englishman has been the shining light of RR for the last couple of seasons.

Archer was brilliant last season during IPL 2019 as he picked up 11 wickets from 11 games, at an economy rate of just 6.67, which is incredible really when one considers the fact that the Englishman bowls often in the powerplay and the death. He hasn’t shown his exploits with the bat in the IPL yet but it is fair to say that he can use the long handle of the bat every now and then.

Not only that, Archer is brilliant in the field and is an incredible athlete. A lot will be riding on Archer if RR are to make it to the playoffs.