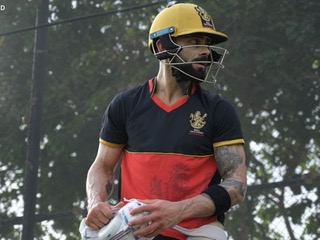 India & Royal Challengers Bangalore’s captain Virat Kohli has a bat in his hands in an official capacity for the first time in six long months as he trained with his teammates in Dubai ahead of the upcoming Indian Premier League (IPL 2020).

Kohli and co have begun training after completing their self-isolation in quarantine in Dubai for the last 6 days.

Also Read:WWE Smackdown Predictions and Preview: Top 5 superstars to watch out tonight ahead of Payback 2020

The 13th edition of the IPL is the first competition for many of the players after the sporting world was placed in lockdown due to the COVID-19 outbreak, and Kohli finally got out on the field with his RCB teammates on Friday evening, sporting new bright gold helmets as they bid for an elusive title. RCB have never won the IPL in the past 12 editions.

RCB tweeted a selection of pictures of their skipper going through net sessions and training routines.

The RCB got down to the not-so-serious business of training in Dubai with plenty of smiles and laughs among they sweat as they were finally reunited after almost a week apart.

They also enjoyed an impromptu game of football tennis on the courts at their hotel and had time to relax in their recreation centre, complete with arcade games, air hockey and pool tables.

Rajasthan Royals and Kings XI Punjab have also completed their quarantine period and have been in training from last two days.