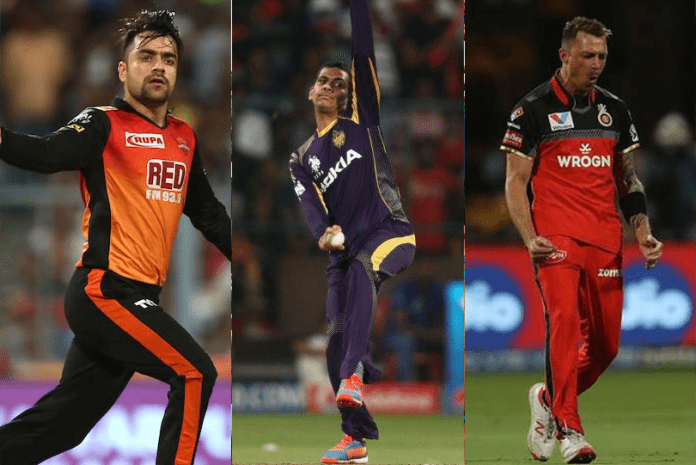 Indian Premier League (IPL) is a tournament which is highly tilted in the favour of batsmen and doesn’t offer much to the bowlers. Shorter boundaries, just two fielders outside the 30-yard circle in the powerplay overs and prevalence of flat pitches are some of the conditions which make things hard for the bowlers.

But despite all the hurdles, if a bowler is able to maintain a good economy rate then there is no doubt about his talent.

Ahead of IPL 2020, we take a look at the top five economical bowlers of IPL:

Afghan leg-break bowler Rashid Khan is an enigma that batsmen in T20 cricket have not been able to crack. From 46 IPL matches since 2017, Rashid has picked up 55 wickets at a strike rate of 19.85 and a brilliant economy of 6.52. His best bowling figure came in his maiden season of IPL in 2017 when he claimed three for 19 in his four overs as Hyderabad beat Gujarat Lions by 9 wickets. Rashid was adjudged the Man of the Match for his sterling bowling spell.

Windies spinner Sunil Narine burst onto the international scene as a ‘mystery spinner’ and was the most lethal weapon in the IPL and T20 leagues across the world before he had to remodel his action.

Nevertheless, Narine is still one of the most economical bowlers in the tournament and he got the ability to pick a bulk of his wickets while bowling the death overs as well as stem the flow of runs in the middle overs. He has bagged 122 wickets in 110 IPL matches and at an astonishing economy of 6.67. Narine has also picked the joint-highest number of four-wicket hauls — 6.

Carrom balls, knuckle balls and skidders are some of the weapons that KKR spinner Narine use to restrict the batsmen in the marquee tournament.

South African pacer Dale Steyn, even at the age of 37 is still rapid. Earlier this year against England and last year for RCB, he was bowling 140 kilometres per hour plus.

Steyn will be eyeing a comeback after he was ruled out of the last IPL with a shoulder injury. He has played 92 IPL matches till date in which he has picked 96 wickets at an impressive economy rate of 6.76. In 2012, Steyn registered his best bowling figures when he claimed three for 8 against RCB while playing for Deccan Chargers.

21-year-old Rahul Chahar who is a cousin of CSK player Deepak Chahar starred in Mumbai Indians’ record title-winning season in May last year, taking 13 wickets at an economy rate (6.55 rpo). In the same season he registered his best bowling figures of 3/19. Overall, Rahul has 15 wickets to his name in 16 IPL games and boasts of an excellent economy rate of 6.77.

Ashwin is one of the most experienced campaigners in IPL, who was bought by Delhi Capitals from Kings XI Punjab during the IPL 2020 auction. He is arguably the best off-spinner in IPL history who has clinched 125 wickets in 139 IPL matches at an excellent economy rate of 6.89.

In IPL 2019, Ashwin claimed 15 wickets despite playing most of his matches on the unhelpful Mohali track. Hence, it won’t be wrong to say that Ashwin can wreak havoc in the UAE where pitches favour spinners.

Other bowlers look out for: