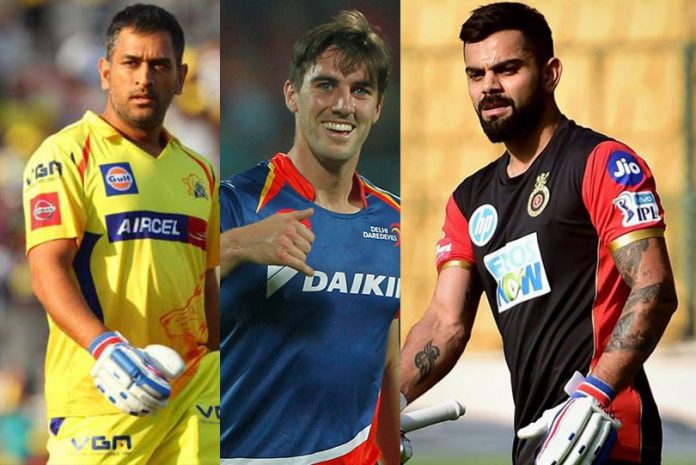 1 Virat Kohli
IPL 2020 Salary – 17 Crore
Virat Kohli is an Indian cricketer who currently captains the India national team. A right-handed top-order batsman, Kohli is regarded as one of the best batsmen in the world. He plays for Royal Challengers Bangalore in the Indian Premier League and has been the team’s captain since 2013.

2 Pat Cummins
IPL 2020 Salary – 15.5 Crore
Patrick James Cummins is an Australian international cricketer who is currently the co-vice-captain of the Australia national team in all formats. He made his Test debut at the age of 18 and plays domestic cricket for New South Wales. Cummins is a fast bowler and a capable lower-order right-handed batsman.

3 Ms Dhoni
IPL 2020 Salary – 15 Crore
Mahendra Singh Dhoni, is an Indian international cricketer who captained the Indian national team in limited-overs formats from 2007 to 2016 and in Test cricket from 2008 to 2014. He is the only captain in the history of Cricket to win all ICC trophies.

4 Rohit Sharma
IPL 2020 Salary – 15 Crore
Rohit Gurunath Sharma is an Indian international cricketer who plays for Mumbai in domestic cricket and captains Mumbai Indians in the Indian Premier League as a right-handed batsman and an occasional right-arm off break bowler. He is the vice-captain of the Indian national team in limited-overs formats.

5 David Warner
IPL 2020 Salary – 12.5 Crore
David Andrew Warner is an Australian international cricketer and a former captain of the Australian national team. A left-handed opening batsman, Warner is the first Australian cricketer in 132 years to be selected for a national team in any format without experience in first-class cricket.

6 Steven Smith
IPL 2020 Salary – 12.5 Crore
Steven Peter Devereux Smith is an Australian international cricketer and former captain of the Australian national team. Smith is consistently rated as one of the top-ranked Test batsmen in the world, according to the ICC Player Rankings

7 Sunil Narine
IPL 2020 Salary – 12.5 Crore
Sunil Philip Narine is a Trinidadian cricketer who plays internationally for the West Indies. He made his One Day International debut in December 2011 and Test match debut in June 2012. Primarily an off-spin bowler, he is also an aggressive left-handed batsman. Narine primarily plays limited-overs cricket.

9 Suresh Raina
IPL 2020 Salary – 11 Crore
Suresh Kumar Raina is an Indian international cricketer. An aggressive left-handed middle-order batsman and an occasional off-spin bowler, he is also regarded as one of the best fielders in world cricket. He plays for Uttar Pradesh in all forms of domestic cricket.

10 Ab de Villiers
IPL 2020 Salary – 11 Crore
Abraham Benjamin de Villiers, is a South African cricketer. In limited overs cricket he is an attacking batsman. He was named as the ICC ODI Player of the Year three times during his 15-year international career. His name was also featured in Wisden Cricketers of the Decade at the end of 2019.