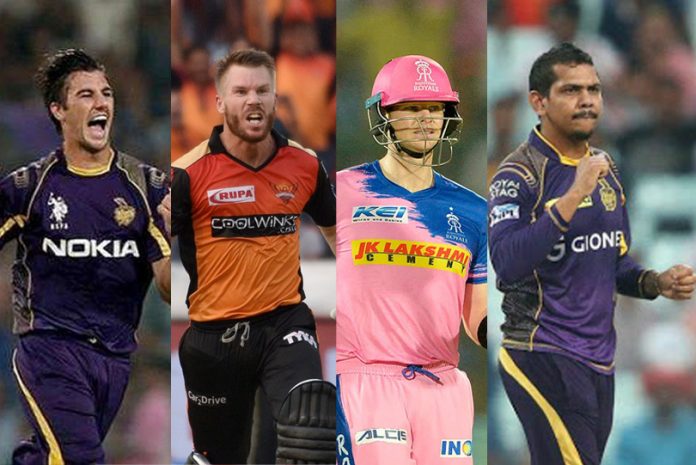 9 Rashid Khan
IPL 2020 Salary –  9 Crore
IPL 2020 Team –  Sunrisers Hyderabad (SRH)
The young Afghanistan leggie, Rashid Khan’s story is nothing short of a fairy tale which really is a tale of hard work and passion bringing deserved glory. He grew up in a war-torn Afghanistan and rose through the ranks by his impressive advancements first in tennis ball cricket and then at the higher levels. He has been retained for a humongous Rs 9 crores by the SRH management for the 2019 edition. The leg-spinner turned in a few memorable match-winning efforts in SRH’s journey to the finals the last edition. Khan took 21 wickets at a strike rate of 19.26 and emerged as the second-highest wicket taker in the 2018 edition. He would certainly be one of the biggest threats for opposition franchises in the upcoming event.
In the Year 2020, Rashid Khan will play for Sunrisers Hyderabad
Also Read: IPL 2020: 10 Interesting facts about Ravindra Jadeja
8 Chris Morris
IPL 2020 Salary –  10 Crore
IPL 2020 Team – Royal Challengers Bangalore (RCB)
Christopher Henry Morris is a South African international cricketer who plays first-class and List A cricket for Titans.
In the Year 2020, Chris Morris will play for Royal Challengers Bangalore 7 Glenn Maxwell
IPL 2020 Salary –  10.75 Crore
IPL 2020 Team – Kings XI Punjab (KXIP)
Glenn James Maxwell is an Australian international cricketer, who currently plays ODI and Twenty20 cricket for Australia. He has also played Test cricket for Australia. He represents Victoria and Melbourne Stars in Australian domestic cricket and Lancashire County Cricket Club in English County Cricket.
In the Year 2020, Glenn Maxwell will play for Kings XI Punjab

6 AB de Villiers
IPL 2020 Salary –  11 Crore
IPL 2020 Team – Royal Challengers Bangalore (RCB)
The second player to be retained ahead of the IPL 2018 Player Auction, AB de Villiers also known as the 360 degree batsman, possesses hard hitting skills, more than decent wicket-keeper and an agile fielder that can put an acrobat to shame on the cricket field. On a good day, AB can single handedly win you matches. He can switch from classical batting to playing more innovative strokes and that sets him apart from most South African batsmen. For RCB, de Villiers has had many an eye catching innings, even picking up an award for the most power packed knock in the 2012 IPL for his assault on Dale Steyn. He has been a finisher par excellence, hitting a sublime hundred in Mumbai in 2015 and another in Bengaluru against Gujarat Lions in 2016. With Virat Kohli, AB has posted five 100+ partnerships for RCB and two 200+ partnerships, the only pair in the world to post two such partnerships. He made 687 runs in the 2016, finishing third on the runs chart.
In the Year 2020, AB de Villiers will play for Royal Challengers Bangalore

5 Ben Stokes –
IPL 2020 Salary – 12.5 Crore
IPL 2020 Team –   Rajasthan Royals (RR)
The New Zealand-born England cricketer Ben Stokes is a destructive batsman and an effective fast-bowler. Stokes made waves in his first season of the IPL when he was bought by the Rising Pune Supergiant at a record price of INR 14.5 cr.  An aggressive cricketer, he smashed an unbeaten 103 in his first season and returned with a best of 3/18 during his 12 matches for the former franchise. Stokes has the ability to take on the bowlers from the word go and can test batsmen with his disciplined bowling; he is the X factor that most team yearn for. He played 13 games for the Rajasthan Royals last season, but did not have the kind of impact he or the team would have wanted.
He scored 196 runs in 13 games and picked 8 wickets from 222 balls that he bowled in the 11th edition of the tournament.
In the Year 2020, Ben Stokes will play for Rajasthan Royals

IPL 2020 Team – Kolkata Knight Riders (KKR)
The mainstay of KKR’s bowling attack for years and the second-highest wicket-taker in T20s across frontiers with a tally of 360 scalps, Sunil Narine would look to up the ante in the 2019 edition. He did suffer a downturn of late when he was called for a suspect action which forced him to modify his action. He would look to outwit batsmen with his constant innovation as an off-break bowler and a more than useful pinch-hitter in the upcoming season. The team management has reposed faith in his abilities by retaining him for an impressive Rs. 8.5 crore in the auction leading up to IPL 2019.
In the Year 2020, Sunil Narine will play for Kolkata Knight Riders 3 Steven Smith
IPL 2020 Salary –  12.5 Crore
IPL 2020 Team – Rajasthan Royals (RR)
Steven Peter Devereux Smith is an Australian international cricketer and former captain of the Australian national team. Smith is consistently rated as one of the top-ranked Test batsmen in the world, according to the ICC Player Rankings.
In the Year 2020, Steven Smith will play for  Rajasthan Royals
2 David Warner
IPL 2020 Salary –  12.5 Crore
IPL 2020 Team – Sunrisers Hyderabad (SRH)
David Andrew Warner is an Australian international cricketer and a former captain of the Australian national team. A left-handed opening batsman, Warner is the first Australian cricketer in 132 years to be selected for a national team in any format without experience in first-class cricket.
In the Year 2020, David Warner will play for Sunrisers Hyderabad

1 Pat Cummins
IPL 2020 Salary –  15.5  Crore
IPL 2020 Team – Kolkata Knight Riders (KKR)
Patrick James Cummins is an Australian international cricketer who is currently the co-vice-captain of the Australia national team in all formats. He made his Test debut at the age of 18 and plays domestic cricket for New South Wales. Cummins is a fast bowler and a capable lower-order right-handed batsman.
In the Year 2020, Pat Cummins will play for Kolkata Knight Riders