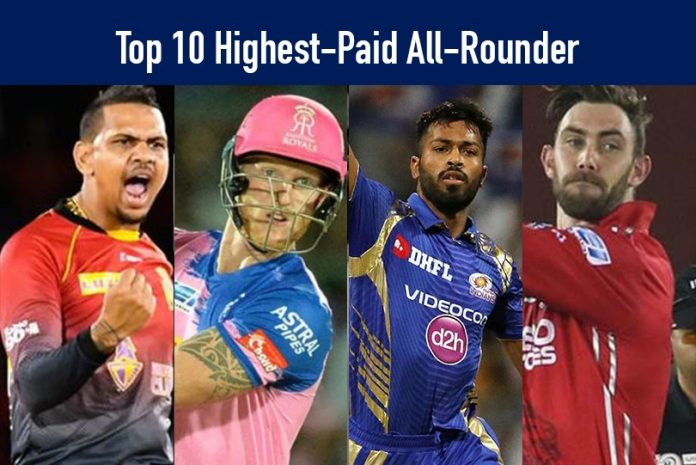 Here are the Highest-Paid All-rounders

10.Kedar Jadhav
IPL 2020 Salary – 7.8 Crore
Kedar Mahadev Jadhav is an Indian cricketer who plays for Maharashtra and the Indian national cricket team. He is a batting all-rounder who bats right-handed and bowls right-arm off-breaks and occasionally keeps wicket.

9.Andre Russell
IPL 2020 Salary – 8.5 Crore
Andre Dwayne Russell is a Jamaican professional cricketer who is widely regarded as one of the greatest T20 players to have ever played the game. Russell plays internationally for the West Indies and for Jamaica in West Indian domestic cricket as an all-rounder.

8.  Krunal Pandya
IPL 2020 Salary – 8.8  Crore
Krunal Himanshu Pandya is an Indian international cricketer. He is an all-rounder who bats left-handed and bowls slow left-arm orthodox. He plays for Baroda in domestic cricket, and for Mumbai Indians in the IPL. He made his international debut for the Indian cricket team in November 2018.

7. Rashid Khan
IPL 2020 Salary – 9 Crore
Rashid Khan Arman, commonly known as Rashid Khan, is an Afghan cricketer and the current vice-captain of the national team. He was one of the eleven cricketers to play in Afghanistan’s first ever Test match, against India, in June 2018.

6.Tom Curran
IPL 2020 Salary –10 Crore
Thomas Kevin Curran is a South African-born English cricketer who represents England in Test matches and One Day Internationals. He plays for Surrey County Cricket Club in English domestic cricket. In the 2018/19 season he played for the Sydney Sixers in the Big Bash League.

3. Hardik Pandya
IPL 2020 Salary – 11 Crore
Hardik Himanshu Pandya is an Indian international cricketer who plays for Baroda in domestic cricket and Mumbai Indians in the Indian Premier League. He is an all-rounder who bats right-handed and bowls right-arm fast-medium. He is the younger brother of Krunal Pandya.

Sunil Philip Narine is a Trinidadian cricketer who plays internationally for the West Indies. He made his One Day International debut in December 2011 and Test match debut in June 2012. Primarily an off-spin bowler, he is also an aggressive left-handed batsman. Narine primarily plays limited-overs cricket.