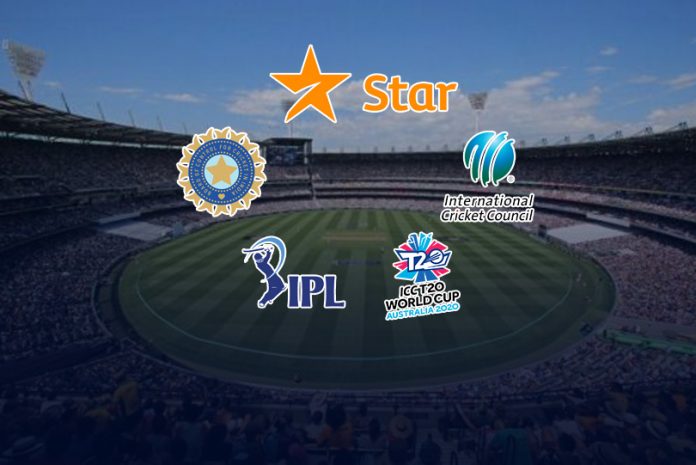 The constant delay in the decision making on account of the Indian Premier League 2020 (IPL 2020) and the T20 World Cup, as expected is not going down well with the broadcaster Star India. As per the information with InsideSport, Star India is so ‘miffed’ with the current situation that they have shot off official letters separately to both the Board of Cricket Control of India (BCCI) and the International Cricket Council (ICC) showing their displeasure on the current situation.
Star India shoots mail to BCCI, ICC for clarity on IPL 2020 & T20 WC
Star India has clearly conveyed to both BCCI & ICC via separate letters that any further delay on the decision about schedule of IPL 2020 and T20 World Cup respectively will ‘undermine its position to monetize the said rights’. Star India has further requested both the top cricketing bodies to take their decision either-ways so that the broadcaster can plan their TV Schedules, freeze marketing plans and more importantly can start roping the advertisers on these mega properties.
According to the source who is privy to these email’s, Star India is ‘miffed’ with this entire delay in the decision making around these events and is not ready to wait any longer.
Also Read: ICC Board Meeting Live : ICC once again ‘unlikely’ to decide fate of the…
“Star India is understandably miffed with the situation. These are no small rights, huge commercial values are attached to it. For IPL Star has to collect 3000 crore from the market, it can’t be monetized at the drop of hat. Market anyway is very tough, schedules should be finalized ASAP or Star will have to face big loss on account of this delay. Same goes with ICC World Cup, the outlays are very big for that as well”
InsideSport has further learnt that Star India is also in discussion with BCCI in regard to reduction of the rights fee for IPL 2020 edition. BCCI meanwhile is yet to respond favorably to the suggestion.
Star India & BCCI both without denying the information available with InsideSport, refused to comment on the same. Meanwhile when InsideSport reached to ICC to check their reaction on the letter sent by broadcast partners Star India, they simply reverted by saying “ICC as policy do not comment on the commercial matters”
Star India’s Cricket Investments on BCCI, ICC
Star India is currently the biggest broadcast rights holder in the world for the sport of cricket. Star India has 5 year global media rights deal with BCCI on IPL. The broadcaster also owns the BCCI home series rights for 5 years. Other than this Star is rights holder for all ICC events rights for 8 year cycle (2015-2023)
IPL Deal Values –      16347 Crores for 5 years
BCCI Home Rights – 6138 Crores for (2018-23)
ICC Global Rights –  $1.9b (2015-23)
With these kind of big numbers involved, it is understandable that the broadcast right holder is extremely concerned. Meanwhile the advertising industry already has started predicting value erosion for IPL 2020. According to RS Sodhi, MD of Amul – one of the biggest advertiser in the industry, IPL 2020 can see cuts up to 50% in the media rates.

According to Sodhi, despite of IPL’s reputation of delivering ROI’S for the brands this time the situation will be completely different.

In these uncertain times, Star India would just expect some certainly on schedules from BCCI and ICC on IPL T20 and T20 World Cup. More delays can be death knell for these events this year.