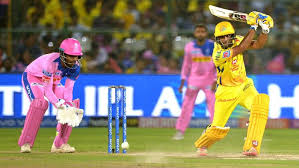 Chennai Super Kings (CSK) will square off against Rajasthan Royals (RR) in Game 4 of the ongoing thirteenth edition of the Indian Premier League at Sharjah Cricket Stadium in Sharjah later on Tuesday evening @7.30pm.

Rajasthan Royals would be bolstered by the fact that their skipper Steve Smith has fully recovered from concussion injury and is ready to lead from the front. With a high-octane encounter in the offing, let’s have a look at the possible player battles that can pan out tonight.

Royals skipper Steve Smith, who has been bestowed with the captaincy responsibilities has been a consistent performer in the IPL over the years amassing 472 with three fifties in 2017 and 319 runs, again with three half-centuries, last year

Smith’s battle with South African fast bowler Lungi Ngidi could be an interesting one. Extreme pace can trouble the best of batsmen, and Ngidi is definitely gifted in that department. He can clock up speeds in excess of 140. Ngidi would be confident after his three-wicket show against Mumbai Indians.

An attacking batsman versus a leg-spinner often makes for an intriguing contest. And Rajasthan Royals’ David Miller is among the most aggressive batsmen on the T20 circuit. Even if Miller spends only a couple of overs at the crease, he has the ability to swing the momentum of a game. Royals must thus maximise his potential.

Big-hitters like taking on leg-spinners. But, the contest is like a double-edged sword. Piyush Chawla is nothing short of an IPL veteran with 151 wickets in 158 matches at a strike rate of 20.84. He has performed against the best in the business and has made his mark with his guile. In the tournament opener against Mumbai, he was in top form, dismissing Rohit Sharma while conceding only 21. Chawla can trouble the likes of Miller, who will definitely look to take him on

34-year-old Rayudu played a mature hand in Chennai’s win over Mumbai in the IPL opener, with his 48-ball 71. Batting in the middle order, Rayudu is most likely to face talented Royals leg-spinner Shreyas Gopal. It would be an interesting challenge for the former India batsman.

The leg-spinner had a wonderful 2019 season, claiming 20 wickets at a strike-rate of 14.40, which featured a hat-trick against Royal Challengers Bangalore. With his bag of tricks, Gopal troubled even legends like Virat Kohli and AB de Villiers. Most definitely, he would be looking forward to taking on the likes of Rayudu.