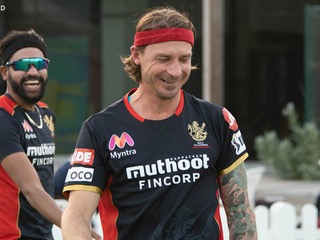 The South African paceman Dale Steyn regularly features in the Indian Premier League (IPL) every year. Other than missing, 2017 & 2018 seasons, Steyn has featured in every IPL since its inception.
But never ever Indian cricket fans have seen Steyn in a look what they will be witnessing in the IPL 2020 as he gets ready to play a big role for Royal Challengers Bangalore team.
Steyn will be seen in a completely different look than what people knows of him. His new look for IPL 2020 is nothing less than of a rockstar.
– Steyn will be spotting long hair in IPL 2020
– His LEFT arm is full of tattoos
This is the reason, RCB has decided to name him ‘ROCKSTAR of RCB’
IPL 2020 : ‘Dale Steyn is bowling some different deliveries, will contribute a lot in IPL 2020’, says Hesson
Looks is not the only change that Steyn has come up with for IPL 2020. According to RCB’s team director Mike Hesson, teams will see completely different Steyn this time in IPL 2020.
“He’s developing his game,” former New Zealand head coach Hesson said of the 37-year-old quick.

“We saw some different deliveries that he’s been able to develop over the last six months. So he’s certainly not ready to retire yet, certainly very keen to make a contribution this IPL.”

Steyn, who quit Tests in 2019 to prolong his limited overs career, has played three Twenty20 International matches this year in addition to his stint in the Pakistan Super League.
Hesson has declared that Steyn along with team’s other extremely experienced international star AB De Villiers will be the team’s big stars as still they have plenty to offer to the team.
The Royal Challengers Bangalore (RCB) team has never won the Indian Premier League (IPL) trophy and according to former Kiwi coach – these two can be team’s trump cards this year. Hesson feels De Villiers has especially lot to offer to the team.
“Only a matter of weeks ago he took part in a match in South Africa and once again he was a standout player, having just come out of his living room. So that certainly showed the quality of player he is,” Hesson told a virtual media conference from Dubai on Wednesday.“He’s had very, very good franchise tournaments around the world the last 12 months and he’s in good touch.

“Physically, he’s feeling good and refreshed. And once again, he’s one of the few in the group that are absolutely chomping at the bit to get into training.”

RCB is scheduled to play Sunrisers Hyderabad in the on Sep21st in their first game of IPL 2020. Watch the space for IPL 2020 updates.