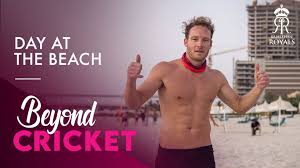 The 13th edition of the Indian Premier League (IPL 2020) is slated to begin from September 19th and earlier today the schedule for the same was released. Defending champions Mumbai Indians will take on 3-time IPL winners Chennai Super Kings in the opening match of the upcoming 13th edition.

The teams are already busy formulating their penultimate plans and figuring out the permutations and combinations for the final playing XI. With the quarantine phase over, the teams have also ensued in hardcore training sessions, gearing up for the marquee event after a much-anticipated wait.

With the new IPL season being played in UAE, the players also got a chance to experience their new venue. IPL innagural winners Rajasthan Royals team also made the most of it have a fun day at the beach followed by some light moments over pool boards as the team bonded ahead of the kickstart of IPL 2020.

In the meanwhile, Rajasthan Royals will start their opening campaign against MS Dhoni’s Chennai Super Kings on September 22.