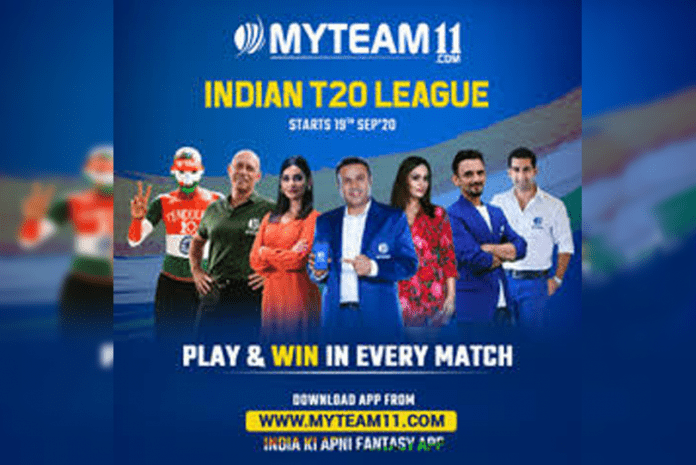 MyTeam11, one of the leading Fantasy Sports Platforms of the country today unveiled their campaign named “India Ki Apni Fantasy App” around the Indian T-20 season. The campaign is aimed at promoting the message of “Indian Brand for Indian People”. It emphasizes on taking pride in playing one’s favourite fantasy cricket game on a homegrown application which promises to bring the users closer to the experience of the actual matches of the league.
The campaign was launched through videos wherein cricket experts can be seen recommending and creating their own teams in the MyTeam11 app. The campaign which is going to run throughout the Indian T-20 season features MyTeam11’s Brand Ambassador Virender Sehwag along with newly signed campaign ambassador for the Indian T-20 season, former New Zealand fast bowler and renowned cricket commentator Danny Morrison. It also features famous names from the world of Sports Television who have come on board as the ambassadors for MyTeam11. The names include the likes of Jatin Sapru, Sanjana Ganeshan, Mayanti Langer, Suhail Chandhok and Master Blaster Sachin Tendulkar’s biggest fan Sudhir.
All the ambassadors will be seen in all social media and on-air commercials urging the fans to stay home, stay safe and engage with their favourite league through MyTeam11. During the course of the league, they will also be seen making their own fantasy teams on the application for select matches which will be intended to enable the Indian users to make better choices during the course of the tournament.
Speaking about the campaign, Manvendra Singh Rathore, CMO, MyTeam11 said, “This has been a difficult year for all of us and the Indian T-20 season brings a new lease of life for the cricket fans in the country. It is a time when the country wants to build its own brands which can serve the people and with “India ki Apni Fantasy App” campaign we want to stress on that very factor. We are leaving no stones unturned to ensure the best possible and immersive user experience on our application.”
Myteam11’s Campaign Ambassador for the Indian T20 Season, Danny Morrison resonated a similar feeling and said, “I am very excited to be associated with MyTeam11 and their campaign “India ki Apni Fantasy App”. I have been an avid fan of fantasy gaming and what better time to engage with fantasy sports when the biggest T20 league of the world will be in action. MyTeam11 has been doing some great work and the features of the application are really user friendly. They understand the Indian cricket fans to the core and I can truly say it is “India ki Apni Fantasy App”.

The pre-season marketing campaign has already started across news channels in different languages and digital media covering multiple regions across the country. Apart from this, there are extensive campaigns planned on Star Sports Network as well as on digital and traditional media during the Indian T20 season.

The users can download the application from MyTeam11.com. Below is the link of the campaign video