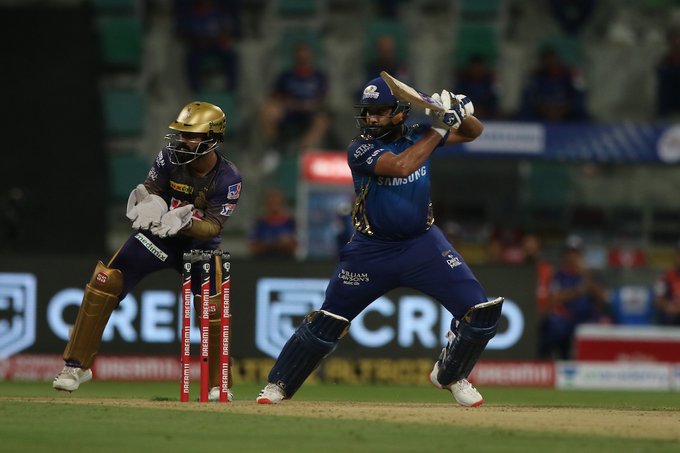 The ‘Hitman’ starred with the bat with a quickfire 54 balls 80 to propel Mumbai Indians to a total of 195 which Dinesh Karthik’s men fell terribly short of as KKR lost their opening game of the tournament by 49 runs.

Meanwhile, Rohit’s innings saw him breaking and creating many records. Check them out here:

Rohit Sharma bagged his 18th Man-of-the-Match award after MI registered victory against KKR on Wednesday. With this, he became the only Indian player to win the prestigious award for 18 times, thus surpassing Chennai Super Kings captain MS Dhoni, who has clinched the award for 17 times.

Overall it’s Windies batsman Chris Gayle who tops the ‘Man of the Match’ awards list with 21 awards, followed by South Africa’s AB de Villiers, who has won the coveted award for 20 times.

Rohit became the second Indian batsman and the fourth cricketer overall in IPL history to have hit 200 or more sixes. Rohit touched the milestone during the 14th over of MI innings when he stepped out to countryman Kuldeep Yadav and deposited the ball over the long-on boundary.

Interestingly, MS Dhoni was the first Indian to smash 200 sixes in IPL.

Overall, Windies batsman Chris Gayle holds the record for the most sixes in IPL history with 326 maximums to his name. He’s followed by AB de Villiers who has smashed 214 sixes till date. Dhoni, who has a present tally of 212 sixes in his 192 appearances in the league, is third on the list.

Becomes highest run-scorer against any team in IPL

Rohit Sharma on Wednesday became the batsman with the most runs against any particular opposition in IPL. The MI skipper now has 904 runs against KKR, which includes one hundred and six fifties.

In the process Rohit overtook Sunrisers Hyderabad’s captain David Warner, who previously lead the list with 829 runs against KKR.

Third on the list is Royal Challengers Bangalore’s skipper Virat Kohli, who has 825 runs against his home team of Delhi Capitals.