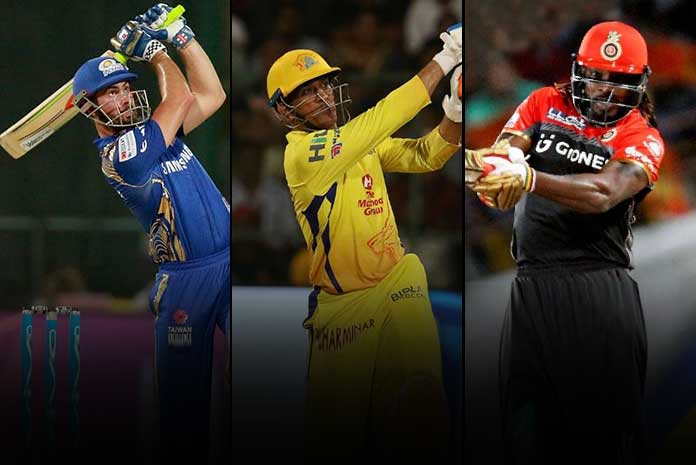 Ask the fans, what do they enjoy the most in the Indian Premier League. Without any doubt, most of them will answer – when the ball gets hit for a six and lands in the spectators stand or out of the park. The biggest roar in the IPL is always reserved for the sixes, i.e when someone hits the IPL MAXIMUM.
Do you know who are the biggest six hitters of the IPL History. Yes, the player who has hit the longest SIX in the IPL HISTORY.
Check out the details about the 5 Longest Sixes in the Indian Premier League HISTORY
1) Chris Gayle (119 Meters) – RCB 2014
The man who has the most sixes record in his name also has the longest six in the history of IPL. In IPL 2014, Gayle was at his ferocious best. Playing for Royal Challengers Bangalore, Gayle’s six was measured at 119 Meters. The longest ever 6 in the entire history of IPL.
2) Ben Cutting (119 Meters) – Mumbai Indians 2016
Ben Cutting had a average season with Mumbai Indians in IPL 2016 but his 6 hitting capabilities were talk of the IPL that year. One of the Cutting’s SIX was measured at 117 meters, second ever longest SIX in IPL.
3) MS Dhoni (112 Meters) – Chennai Super Kings 2012 & Chris Gayle (112 Meters) – 2013 RCB
MS Dhoni has been one of the biggest six hitter all his life. In IPL 2012, the former Indian captain was at his prime and so was his six hitting capabilities. One of the Dhoni’s six was 112 meters which till date is his longest 6 ever in IPL. Though one must say, he is SIX hitting capabilities has not waned with time. In IPL 2019 as well his six was measured just 1 meter shot of 2012 six at 111 METERS
Gayle the UNIVERSAL BOSS was on a six hitting spree in 2014 and along with the longest ever six in IPL @ 119 meter, he also had 112 meter 6 in IPL 2014
4) MS Dhoni (111 Meters) – Chennai Super Kings in 2019
AB De Villers (111 M) – RCB in 2018
Chris Gayle (111 M) 2012-2013