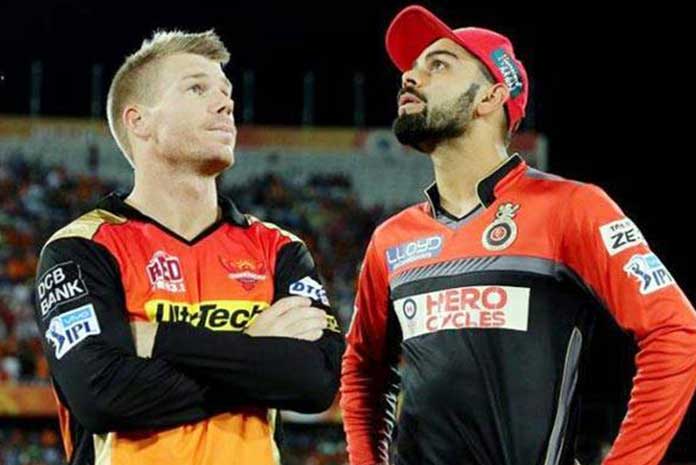 That’s it from us for tonight. Thank you guys for joining us. See you again next time.

This has been a clinical performance by RCB bowlers. When the chips were down, they all contributed and took regular wickets to comeback in the match. A truly clinical performance. Sandeep Sharma did throw his bat around, but that was not enough. SRH all out for 153.

The injured Mitchell Marsh is on for his team, limping and in pain. Off his first ball, he tries to go for a six against Dube but his shot goes straight into the hands of Kohli. The Australian has also hurt himself in the process. SRH are 143/9 after 18.2 overs.

Marsh comes out to bat in utmost pain. He goes for the big one but Kohli takes a simple catch in the deep. FOW-143/9

22 runs needed to win from 12 balls. Who will win the Southern derby?

Saini has his second wicket of the over. Rashid missed the ball completely and his furniture is disturbed. RCB have well and truly imposed their authority in the match. FOW-142/8

Saini comes into the attack but delivers five wides and Kohli is not impressed here at the moment. But Saini make amends as he clean bowls Bhuvi.

Abhishek and Rashid collide and the former is run out. This is sloppy work by SRH.Rashid Khan is still down. He doesn’t look at the moment. FOW-135/6

RCB finding late inroads to keep themselves alive in the contest. FOW-129/5

Vijay Shankar departs now; Two in two for Chahal and he has bowled Vijay SHankar on the very first ball. SRH in trouble here suddenly. Can he get a hattrick?

He goes for a big shot and misses the ball completely. Chahal hits the timber. Bairstow is out for 61.

After Umesh threw away the control by giving away 14 runs, Kohli brings in Steyn to do damage control. But even Steyn gets the Bairstow treatment on the second ball: four! Another catch dropped though… both Steyn and Kohli shake their head. SRH are 121/2 after 13 overs.

Priyam Garg (2*) comes in place of Pandey to lend his support to the in-form Bairstow (44*). SRH have to bounce back quickly before RCB build their pressure on the back of that wicket. Dube gives away just five runs. SRH- 94/2 after 13 overs.

This one went miles in the air and although for a second Dale Styen looked like he had it under control, he made a mess of it in the end. Second reprieve for Jonny Bairstow and SRH.

Kohli has a talk with Chahal and changes his fielding after Finch dropped Bairstow in the last over. RCB need to find a breakthrough here. And they get it as Pandey is caught by Saini near the ropes, and he walks off for 34. SRH are 89/2 after 12 overs.

Chahal gets the key breakthrough and Pandey departs.

Saini back. One just doens’t understand why RCB can’t get wickets. And Finch drops a catch. They are struggling to get wickets here. Same old story for RCB. SRH 83/1 after 11 overs

Manish Pandey and Bairstow gave done well after the initial loss of David Warner to keep SRH in charge. SRH-78/1 after 10 overs

10.13pm
50 partnership comes up for Bairstow-Pandey!

Bairstow with a cheeky scoop to send the ball over the park. Next ball he gets a four off an inside edge to reduce the required runs. SRH 72/1 after 9 overs; need 92 runs from 66 balls

10.05pm
Chahal introduced into the attack

Marginally short of length from Navdeep Saini and Jonny Bairstow brings out the short-arm pull. Timed so well. Last year, he scored 114 off 54 balls against RCB. Will there be an encore tonight? SRH-48/0 after 6 overs

9.52pm
Back to back boundaries

Manish Pandey hits Umesh Yadav for back to back boundaries but Yadav does well to give just two more runs in the end. SRH-40/1 after 5 overs

Bairstow and Manish Pandey shouldering the responsibilities currently for SRH after the dismissal of David Warner. SRH-25/1 after 3 overs

Bairstow hits Yadav for a 4 and a 6. He times the next one really well straight down the ground but Yadav manages to get his fingers and the ball is redirected to the wicket with Warner still out of the crease. FOW-18/1

Oh no!! Jonny's shot kisses Umesh's fingers before tumbling onto the stumps ☹️

Warner cracks one through the covers. What a shot to begin with but Stey does good to maintain a tight first over. SRH-6/0 after 1 over

9.29pm
We are back with the SRH chase

2 run outs in the final over for RCB as they could manage to post 163/5 at the end of 20 overs. Excellent last over from Bhuvi, just 7 runs at the end.

Unfortunate for the RCB man; ABD starts the last over of the innings with a four off Bhuvi but he is run out for 51 on the very next ball by Manish Pandey. FOW-162/4

The Proteas batsman brings up his 34th IPL fifty. It has been a very important innings for RCB as he completes the fifty off just 29 balls.

9.07pm
Back to back sixes
De Villers keeps strike for the 20th over

ABD getting in the groove for a big innings. Natarajan bowls one right in the slot and the batsman hits it past him. This is good batting by the South African. RCB 141/3 after 18 overs

Natarajan with a slower ball and Virat Kohli commits himself; fails to clear the rope and is caught in the deep by Rashid Khan. FOW-123/3

Both Kohli and De Villiers are running well and trying to build a partnership here, after the loss of two wickets. Just not letting the bowlers get on top here, Rashid comes in to bowl his last over. RCB-108/2 after 14 overs

Kohli and ABD have started getting single & doubles. They are putting pressure on the fielders here, will look for the big shots later. RCB 102/2 after 13 overs

8.32pm
Back to back wickets for SRH

Vijay Shankar with the breakthrough as he sends the RCB opener’s wicket cartwheeling. FOW-90/1 after 11 overs

Half-century for Padikkal, what a brilliant innings from the opener. RCB-86/0 after 10 overs

How's that for a maiden IPL FIFTY!

Devdutt Padikkal brings up his half-century off 36 deliveries.

The #RCB openers have got off to a flyer.

Finch and Padikkal has given a great start to RCB with the score currently climbing at 8rpo. RCB-64/0 after 8 overs

Our debutants have arrived and how! 🔥

7.57pm
Marsh injured and has to leave field

Even after getting some treatment in between the over, Mitchell Marsh is off the field with a physio. The right ankle already has a strapping but he doesn’t look fine to continue. Fabian Allen comes on as sub. RCB are 38/0 after 4.4 overs.

An excellent first over from Bhuvaneshwar; just 2 runs off it. Nice shape and decent movement from the Indian as both Finch and Padikkal found it tough to get something underneath it. RCB-2/0 after 1 over

“We will bowl. There is a bit of dew around. It was an interesting game last night. We know it’s going to get a bit tired towards the end. We have the balance in the side.”

“We have made a few changes, to the setup and the team as well. We feel relaxed and balanced. One idea was to create more leaders in the time. The guys have worked really hard during the lockdown period in whatever way they could. They have taken a lot of responsibility in these three weeks as well. Lot of batting happened in the last three wickets.”

6.30pm
Exactly half an hour to go for the toss

In their last five completed head-to-head encounters, Sunrisers have won 3 battles as compared to RCB winning twice. In the 12th edition of the IPL, wherein the two teams played each other twice, the result was 1-1.

5.35pm
Less than 2 hours to go!
Are you ready for the South Indian derby tonight?

David Warner is set to appear as IPL captain for the 48th time and is set to surpass Kumar Sangakkara’s tally of 47. SRH will begin their IPL 2020 campaign against RCB in a few hours.

4.48pm
Can Bairstow do an encore tonight?

What does the ‘run-machine’ Virat Kohli think about today’s match between SRH vs RCB?

2.40pm
A great initiative by Virat Kohli and RCB

Hello guys. Welcome to the live coverage of SRH vs RCB IPL 2020 Match 3.

After last night’s drama between DC vs KXIP, which DC won in Super OVer, we are promised yet another high octane clash when two of the world’s leading batsmen in the shortest format- Virat Kohli and David Warner take the field with their teams (RCB and SRH respectively).

5.35pm
Less than 2 hours to go!
Are you ready for the South Indian derby tonight?

David Warner is set to appear as IPL captain for the 48th time and is set to surpass Kumar Sangakkara’s tally of 47. SRH will begin their IPL 2020 campaign against RCB in a few hours.

4.48pm
Can Bairstow do an encore tonight?

What does the ‘run-machine’ Virat Kohli think about today’s match between SRH vs RCB?

2.40pm
A great initiative by Virat Kohli and RCB