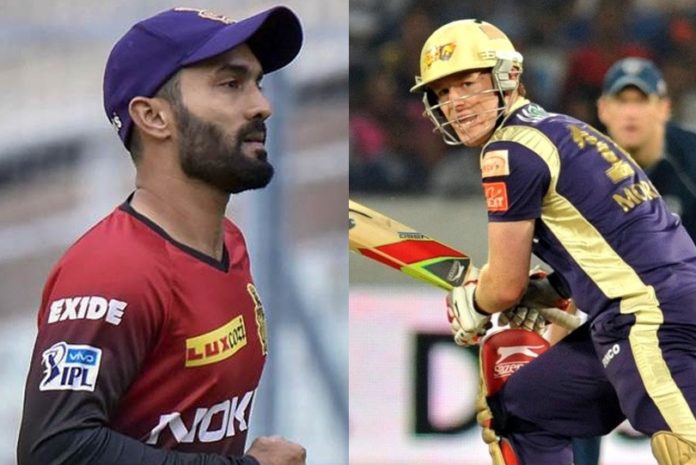 Ahead of Kolkata Knight Riders (KKR’s) first match of Indian Premier League (IPL 2020), a concern pestering the team management is- Is Dinesh Karthik the right choice going ahead?

Even before he led the Kolkata Knight Riders (KKR) onto the playing field for IPL 2020, there are already statements in the media about how Eoin Morgan should replace Karthik as skipper if KKR don’t begin well in IPL 2020. So Karthik simply has to go and beat Mumbai Indians (MI) in KKR’s first match.

But before drawing any speculations, let’s weigh what are the chances of Karthik getting a win tonight against the Mumbai Indians.

Indian batting legend and cricket pundit, Sunil Gavaskar on the other hand feels if KKR do not perform, the management might replace Dinesh Karthik as captain and Put Morgan in charge.

Gavaskar opined that the addition of England’s World Cup-winning captain Eoin Morgan has made Kolkata Knight Riders an even more dangerous unit than before in the IPL. Morgan led England to the World Cup title last year and has been in tremendous form with the bat, as it witnessed during England’s limited-overs series against Pakistan and Australia.

He added, “Even this can happen that if in the first four-five games if KKR do not start well, then Eoin Morgan can replace Dinesh Karthik as the captain of the side because we always have had that complex,” Gavaskar said.

IPL 2020 KKR vs MI: Mumbai Indians have the edge over KKR

Mumbai Indians won’t be happy about having lost to Chennai Super Kings in their opening match.

But crucially, they have had a feel of the conditions, while KKR will be coming in blind, which could be a big difference.

Mumbai Indians, they are unlikely to make any changes to the side, irrespective of their loss. Tiwary is a floating player, but being the top-scorer in the last match makes him a surety for the next one.

Mumbai Indians will surely be confident of winning this one, though a single assault by any of the KKR boys could be enough to change the result.

Head to Head  History: Kolkata Knight Riders vs Mumbai Indians (KKR vs MI) Year up to 2020