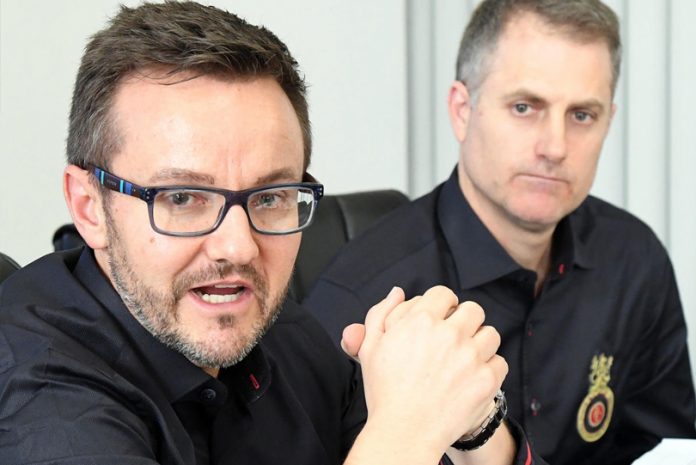 Chasing their maiden IPL title, Royal Challengers Bangalore have all bases covered heading into the league, including its achilles heel, the death bowling, reckon members of its brand new coaching staff, Mike Hesson and Simon Katich.

Tuning in from the confines of their hotel room in Dubai, where they are nearing the end of a six-day quarantine, RCB director of cricket Hesson and head coach Katich spoke about their vision and plans for the side which has made three IPL finals but has been unable to cross the final hurdle.

During the webinar, they both felt that gradually increasing the intensity of training is best way forward as most players are coming back from a six-month break. It will keep them physically and mentally ready for a long tournament like the IPL, which will be played in the searing heat of UAE.

RCB, led by their captain Virat Kohli, has always been a team full of stars but has not played to its potential. After reaching the final in 2016, it has had three forgettable seasons.

As senior player Yuzvendra Chahal pointed out in a recent interview, RCB lost 30 percent of their games due to their death bowling over the past three seasons.

However, Hesson believes that issue has been addressed with signings of Chris Morris, Isuru Udana, Kane Richardson and Dale Steyn, who was bought back at the auction after being released.

“We were very clear about our death bowling and wanted to make sure we got it covered. We went into the auction wanting to fix that,” said Hesson at the virtual media interaction.

“We have got Udana, Morris, Richardson, Steyn. Navdeep Saini has done the job nicely and our spinners too will play a big part. We got Chahal who is exceptional bowler and a nice mix of spinners (Shahbaz Nadeem, Pawan Negi, Moeen Ali).

“We think we are not so much reliant on our batting and have a balanced unit.”

In the batting department, their biggest buy in the December auction was Australia’s limited overs skipper Aaron Finch.

Katich said Finch’s presence will benefit Kohli, who also has greats like AB de Villiers and Steyn to turn to for help.

“We were looking for guys at the top of their game in international cricket. Finch was high on that list. As a player and captain, he has done well for Australia. He is a good player of spin and brings leadership in the group.”

Hesson was asked about Steyn and De Villiers, who have not played a lot over the past 12 months.

“RCB got legends in Dale and ABD. Both players took part in an exhibition match in South Africa recently, de Villiers was the stand out player. It shows his quality.

“Steyn is another one. When we saw him return (from injury) six months ago, he was in exceptional form. He is developing his T20 game and working on different deliveries. He is not ready to retire yet and keen to make a contribution,” said the former New Zealand coach.

Katich said getting players ready after a long break like they have had will be a challenge, especially the younger lot but therein also lies an opportunity.

“We will find out how they adjust after a long break. The experienced lot can draw on what they have done in the past (in similar scenarios) but working with younger guys will be a tougher challenge.

“Unfortunately, it is a different situation (due to COVID-19 players have not played enough). At the same time, they they are fresh and hungry. The big thing is how they adjust mentally and cope with the anxiety.

“Current form (in the nets) will count a lot, if someone shows form instantly (he would be considered),” said Katich, who will oversee the training of 16 players to start with as Udana is expected to arrive shortly.

The four players from England and Australia will join the squad post their bilateral series which ends on September 16.

Katich said the heat will be a challenge but it is something most Indian players are used to.

“Though they are used to it, it could still be a challenge considering they are back from a big break, not only from a skill point of view but also mentally.”

Hesson concluded by saying that RCB’s focus will be on having a stable team composition and ensuring that they don’t drift away from their style of play even in the toughest of scenarios.