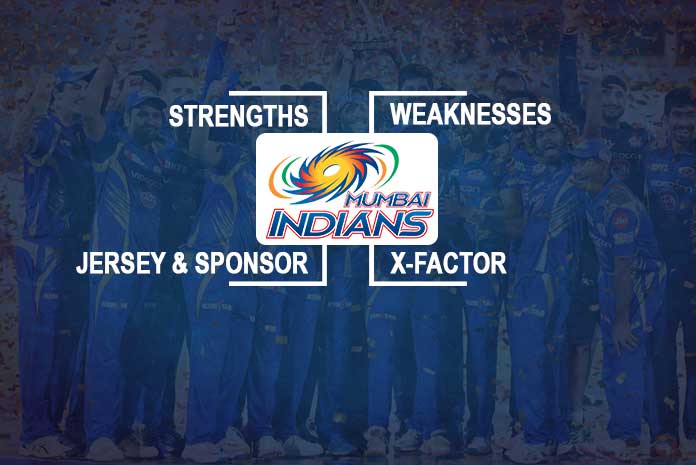 The 13th Indian Premier League (IPL 2020) is all set to begin from the 19th of September. Mumbai Indians are the defending champions, having won the previous edition against arch-rivals Chennai Super Kings. The Rohit Sharma-led franchise will once again open their campaign opposite CSK in IPL 2020 as they eye for a record 5th IPL title.

But are they looking good to win their 5th IPL TITLE ? What makes them so strong ? What are their weaknesses – check all you want to know about the Mumbai Indians squad and InsideSport prediction on the Rohit Sharma’s team.

Mumbai Indians in IPL 2020 : One of the best top orders

The addition of Chris Lynn into the squad will add another dynamic to the 4-time IPL winners at the top of the batting order.

The destructive opener is expected to partner South African wicket-keeper Quinton de Kock. The De Kock-Lynn opening combination might even push one of the greatest white-ball openers the game has ever seen, Rohit Sharma – to No. 3.

Also, with Suryakumar Yadav and Ishan Kishan viable options at No. 4, MI could win most of their games in the first phase of their batting innings.

In Rohit Sharma, Jasprit Bumrah and Hardik Pandya, MI have three players who are some of the first names on the Indian cricket team-sheet.

Krunal Pandya and Rahul Chahar have been on the fringes of the Indian T20I team for some time, and are not regulars only because of the presence of Ravindra Jadeja and Yuzvendra Chahal respectively.

Suryakumar Yadav and Ishan Kishan have also had sufficient IPL experience, leading to MI having a sizeable part of their playing XI fixed already which other are struggling to muster.

As most of the IPL teams are waiting & apprehensive of their foreign recruits joining them late from CPL & England-Australian bilateral exchange – M.I is sitting pretty will very less dependency on the outsiders.
2. Weaknesses

Mumbai Indians in IPL 2020: Insufficient depth in the spin department

Had the IPL 2020 happened in India, MI would have had a lethal bowling attack. However, with the current shift to UAE, the Rohit Sharma-led team might be exposed by quality players of spin.

Rahul Chahar and Krunal Pandya are the only two spinners in the XI, and both are are run-saving rather than wicket-taking options. MI needed a spinner who depends on flight and guile to pick up wickets rather than Krunal and Chahar, who are both quick through the air and not massive turners of the ball.

Trent Boult, who has an economy rate of 8.78 over the course of his IPL career, played only 5 games last season. New signing Nathan Coulter-Nile hasn’t played a single game in the last two IPL seasons, and if he manages to make it into the playing XI, he might be thrown into the deep end.

Dhawal Kulkarni is the only other quality Indian option, and the former Rajasthan Royals pacer has conceded runs at an economy rate of over 9 in all the previous three IPL seasons with only 13 wickets to show for. Much of the responsibility might fall on Bumrah’s shoulders, and the Indian spearhead might be left with too much to do on his own, especially while returning from such a long break.

Hardik Pandya, who was the best player for Mumbai Indians (MI) in 2019 is once again expected to provide the X-Factor for the franchise this season.

The all-rounder has been out of action for quite some time and will be returning to high-intensity cricket with IPL 2020. Hardik played a some match-winning blinders in the last edition and will be carrying his form and confidence into the upcoming season too.

Apart from Hardik, MI’s ‘second-string stars’ could shoot into the reckoning for the Indian team

In Rahul Chahar and Krunal Pandya, MI have two players in and around the Indian T20 team. With two T20 World Cups scheduled to be played in successive years, both players will very keen on making a statement with their performances in IPL 2020.

Mumbai Indian’s Principal Sponsors are Samsung and Colors while its Associate Sponsors are Marriott BonVoy, Jio and Astral Pipes.