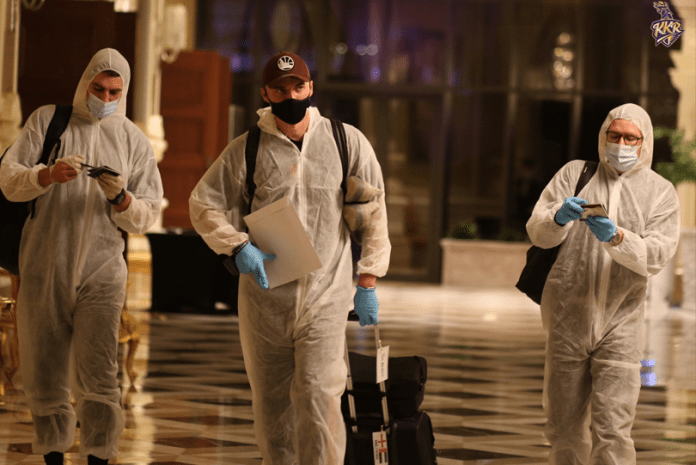 The Indian Premier League’s most costliest foreign cricketer Pat Cummins has landed in Dubai. Cummins with a price tag of 15.5 Cr arrived in chartered flight along with others to play for Kolkata Knight Riders in IPL 2020. KKR’s other players Eoin Morgan, Tom Banton also accompanied Cummins.

But the Different sets of quarantine rules in Abu Dhabi and Dubai can frustrate KKR of including their England and Australia cricketers in playing eleven for their first game in IPL 2020. The players landed in Dubai late on Thursday evening but the Abu Dhabi government has so far refused to relax their 14-day quarantine rule regardless of the result of the Covid-19 tests.

Cummins, Morgan, Banton – All aboard ✅

The Knight Riders along with Mumbai Indians are the two franchises which are based in Abu Dhabi. As reported earlier by InsideSport, the Dubai government, however, has agreed to relax the rules and those staying there will now have to undergo 36 hours of quarantine after arrival from the United Kingdom provided the PCR test result is negative.

But the KKR players will have to follow the guidelines of Emirate of Abu Dhabi. The entire Knight Riders earlier had faced a similar problem on landing there last month but the players were allowed to practice within the bio-security bubble after seven days following negotiations with the Abu Dhabi authorities.

KKR management is trying to work the similar thing for Cummins, Morgan & Banton.

“While we are still negotiating with the authorities, we are reconciled to the fact that we may have to quarantine our three players. This may result in them missing the first game” Mysore told ESPNcricinfo.

The Knight Riders’ first match has been slotted for September 23 against Mumbai Indians in Abu Dhabi.