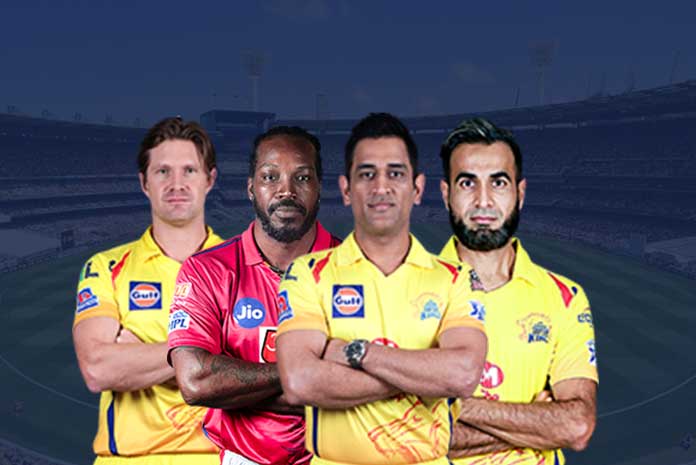 The new season of Indian Premier League (IPL 2020) is around the corner and all the teams are gearing up to shortlist and field their best XI in the upcoming tournament.

IPL consists of all sorts of players with age no barrier. As long as as one has talent and is fit, there is an assurance that he will find a place in either of the teams participating in the tournament.

Here we take a look at the top five oldest players who will participate in IPL 2020:

The most aged and experienced player in Chennai Super Kings (CSK) is South African bowler Imran Tahir, who is famous for his typical running celebration. Besides conventional leg spin, he has a destructive wrong ‘un he uses as a surprise option.

Tahir has became a perfect example in proving ‘age is just a number’ as the 40 year-old has been performing consistently for CSK and he even emerged out as the highest wicket-taker of IPL 2019 with 26 scalps in 17 matches.

Windies batsman Chris Gayle is just like a fine wine who is getting better with age. Despite being on the wrong side of 40, Gayle has the ability to destroy any bowling line-up on his day.The southpaw has smashed highest number of centuries (6) and highest number of sixes (326) in IPL. Also, the KXIP opener is the only batsman to breach the 300-mark in both sixes (326) and fours (368) count.

In the 2013 edition, Gayle scored an unbeaten 175 off 66 balls in Royal Challengers Bangalore (RCB) colours against Pune Warriors India — still the highest individual score in the history of the tournament. Overall, Gayle has scored 4484 runs in 124 IPL innings at a strike rate of 151.03.

Interestingly, Gayle will celebrate his 41st birthday on the 3rd day of the tournament.

Watson, who was bought by CSK during the IPL 2018 auction, has scored 953 runs in 32 matches for the franchise in the last two years, besides capturing six wickets.

Watson has proven himself to be a man of the big occasion as he rarely fails to deliver in big matches. Interestingly, the Australian smashed his highest score (117*) in the final of the 2018 edition against SunRisers Hyderabad. Capable of opening both batting and bowling, Watson will be a key part of CSK’s plans for IPL 2020.

One of the biggest servants of Indian cricket MS Dhoni recently announced his international retirement and now the CSK skipper will be eager to get back onto the field through IPL. Dhoni has won three IPL titles with his beloved CSK and would be aiming to make that four as he steps onto the pitch as an ex-international this time around.

As far as his statistics go, Dhoni has played 174 matches for CSK as a captain and holds a win percentage of 59.8. The wicketkeeper-batsman is also the first skipper to win 100 IPL games.

Dale Steyn joined RCB in IPL 2019 as a replacement for Nathan Coulter-Nile. However, he only played only two matches and did provide initial breakthroughs and took four wickets before a shoulder injury ruled him out of the competition.

Steyn will be eager to give his best in IPL 13 as the the upcoming season of the cash-rich league is crucial for the pacer as he is eyeing a place in South Africa squad for ICC T20 World Cup and a good show in IPL 2020 would place him in a better position. Overall, he has scalped 96 wickets in 92 matches at an average of 24.73 and an economy rate of 6.76.