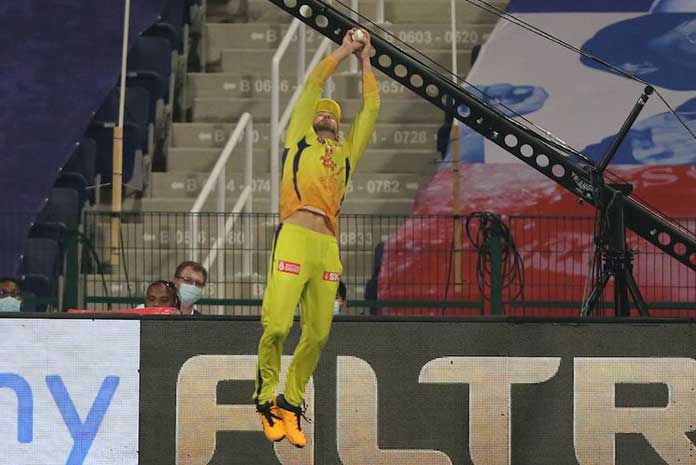 The 13th edition of the Indian Premier League (IPL 2020) got underway in Abu Dhabi with a mouthwatering opening clash between MI vs CSK. And the quality of cricket was top class from the word go from both sides.

If Quinton de Kock and Saurabh Tiwary mesmerised the viewers with their shots, CSK were exceptional in the field thanks to Faf du Plessis. The former South Africa skipper was at long-on in the 15th over when two wickets fell off Ravindra Jadeja and on both occasions, his acrobatic skills were on show at the boundary when many felt that the ball will cross the boundary easily.

The 15th over began with CSK under a little bit of pressure and Jadeja had also gone for a lot of runs by then. They desperately needed a wicket even as Saurabh Tiwary aimed to clear the long-on boundary. But he took on the wrong fielder. Faf du Plessis was stationed there and he just timed his jump perfectly.

In the same over, another opportunity came Faf du Plessis’ way and this effort from the Proteas cricketer bettered the previous one. He was stationed at long-off this time and when Hardik Pandya aimed to clear the ropes off a full delivery from the left-arm spinner,

Faf made sure that the ball didn’t go past him. He had to move to his right a bit this time but even then, he timed his jump and released the ball just in time before getting hold of it again. The man did it twice in the same over and literally made the catches look so easy on both occasions to stun the MI camp and keep a lid on their run-scoring