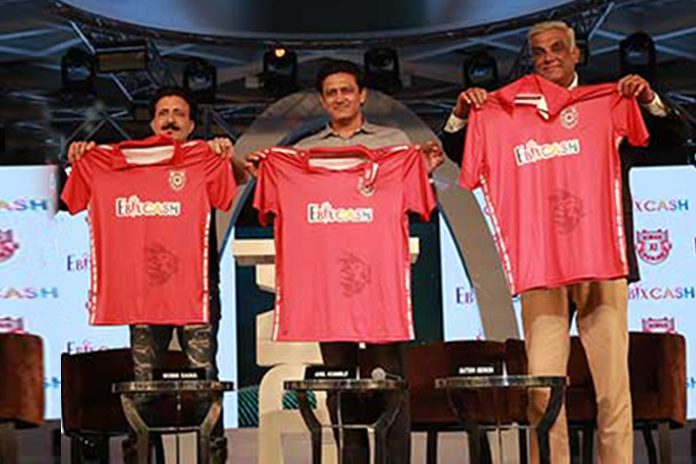 Aajtak out. Kings XI have a new title sponsor in place for the Indian Premier League 2020 season. Unlike the 2019 season, when the Indian Premier League’s Punjab franchisee had to settle for a “compromise last-minute deal” with the TVToday Network for promoting brand Aajtak as the title sponsor, the KXIP have made the big announcement much before the onset of IPL 2020.

Kings XI Punjab have named EbixCash as their title sponsor for the Indian Premier League 2020 season. To begin with, the Mohali-based franchise and EbixCash have agreed on a three-year association. The team also welcomed former India legend Anil Kumble as the Director of Cricket Operations for the twelfth edition of the league.

To mark this momentous occasion and unveil the official jersey, Robin Raina, CEO, EbixCash was present along with Satish Menon, CEO, Kings XI Punjab, Anil Kumble, Director of Cricket Operations, Kings XI Punjab and Arshad Nizam Shawl, Director and Co-founder of Alliance Advertising and Marketing. EbixCash will be seen on the front of the KXIP’s playing jersey for the next three seasons of VIVO Indian Premier League.

Commenting on Anil Kumble’s appointment, Satish Menon, Chief Executive Officer, Kings XI Punjab, said, “We are excited to have Anil Kumble, a calm and composed legend as the Director of Cricket Operations. With his vast experience and knowledge of the game, we are absolutely confident that it will add great value to the franchise and provide a learning opportunity for the young and experienced talent in the squad.”

He further added, “We are pleased to associate with EbixCash and welcome them as our title sponsors. The VIVO IPL 2020 is a fresh start for us, and we believe that it will be a mutually beneficial and fruitful journey for both brands.”

Speaking on the association, Robin Raina, Chairman, President and CEO Ebix stated, “EbixCash is thrilled to partner with Kings XI Punjab for the upcoming season. We see Kings XI Punjab as one of the strongest teams in the Indian Premier League and their passion, commitment and lively Punjabi culture are commendable. This partnership will provide us with a unique opportunity to connect with the audience across India.”

Adding to this, Anil Kumble, Director of Cricket Operations, Kings XI Punjab said, “I am looking forward to work with the fantastic mix of young and seasoned players in the squad. Coming back as a coach of a cricket team again, I hope to make a significant contribution to KXIP’s journey ahead.”