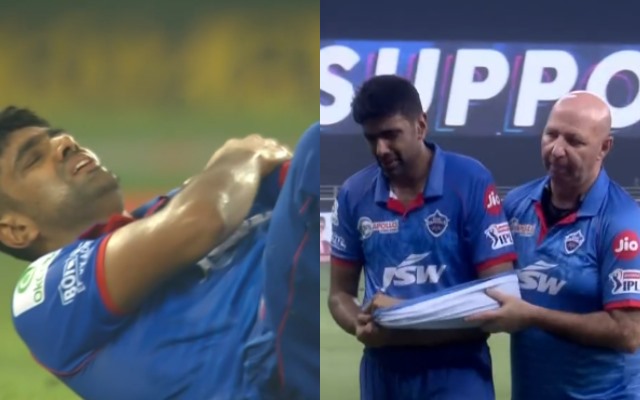 Delhi Capitals captain Shreyas Iyer said the physio will assess the extent of R Ashwin’s shoulder injury before they take a call on his availability in the immediate future at the Indian Premier League (IPL) 2020. Ashwin suffered a nasty blow to his shoulder when he dived to stop a single in his 1st over against Kings XI Punjab in Dubai on Sunday.

Ashwin walked off in visible discomfort and had his hand placed in a sling even as speculations of a shoulder dislocation was rife. Ashwin did not take any further part in the match which ended with Delhi Capitals winning a dramatic Super Over to begin their campaign in the UAE with 2 points.

Speaking after the dramatic win, Shreyas Iyer said the extent of Ashwin’s injury was not yet known but the Delhi Capitals captain revealed that the strong-minded off-spinner told him he would be available for their next match.

Notably, Ashwin was not wearing the sling when he walked out to collect an award during the post-match ceremony in Dubai. The off-spinner showed no sign of discomfort when he was presented with a cheque. Kevin Pietersen, during the post-match show for Star Sports, also pointed out that ‘there was no worry’ when Ashwin came out to collect his cheque.
Ashwin began his Delhi Capitals stint with a dream over, in which he removed Mayank Agarwal and Nicholas Pooran in a span of 5 balls to dent Kings XI Punjab in their chase of 158.

Talking about the match then both the teams ended with a score of 157 for eight and when it spilled to a Super Over, South African pacer Kagiso Rabada conceded only two runs and took two wickets off successive balls to help Delhi Capitals beat KXIP in their opening game of IPL 2020.