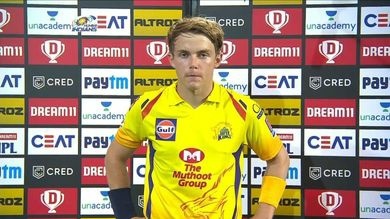 Leave aside playing the Indian Premier League (IPL 2020) opener, Chennai Super King’s foreign hire Sam Curran was not even sure few hours before the game if he would be allowed to board the team bus for Abu Dhabi. As he had landed just 36 hours before the game in Dubai, there was lot of uncertainty in the air whether local authorities will allow him to be part of the opening game or not.

But after the last minute fire-fighting by the CSK team management – not only Sam Curran played the opening game but also played a major role in the team’s fairytale victory.

The young England all-rounder helped CSK defeat Mumbai Indians in the first game of the league. Curran recorded bowling figures of 1-28 from four overs and took two catches as the holders made 162-9.

“It was a six or out mentality so that’s how you have got to play this game,” said Curran.

The 22-year-old played for Kings XI Punjab last season and was making his CSK debut against Mumbai.

He was pushed up the batting order by skipper Mahendra Singh Dhoni as his side chased down their target in Abu Dhabi.

“To be honest, I was very surprised I went in but he’s a genius and he obviously thought something,” added Curran.

“But a great win in the end and a great start.”

Ambati Rayudu top scored for Chennai with 71 from 48 balls, while South African Faf du Plessis was unbeaten on 58 from 44 balls as CSK made a winning start to their campaign in IPL 2020.