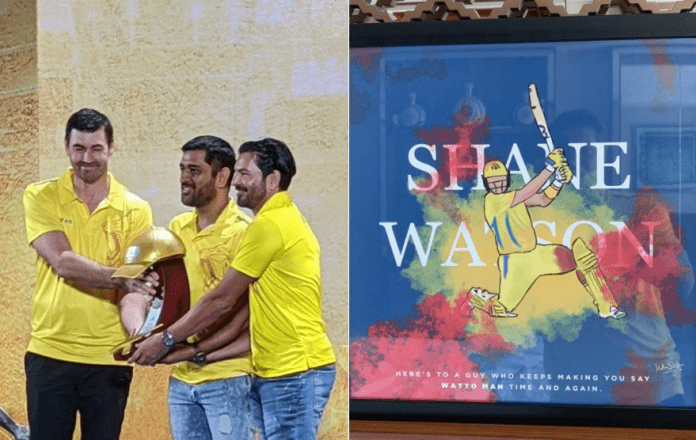 Three-time champions Chennai Super Kings‘ pre-season dinner turned out to be a luncheon instead during which the franchise also handed out special awards to the players, including an honour for captain MS Dhoni.

Dhoni received a special award for being Chennai’s highest scorer in IPL 2019 with 416 runs from 15 matches at 44.20 which also included three fifties. Dhoni led CSK to the final last year which they lost against Mumbai Indians.

CSK posted pictures from their afternoon lunch. The awards were handed out by head coach Stephen Fleming.

“Our customary pre-season dinner turned into a memorable lunch this time and our Lions walked away with some Super Duper Awards. #Thala Dhoni for leading the team with the willow and scoring the most runs for the Super Kings in IPL 2019,” CSK wrote.

Our customary pre-season dinner turned into a memorable lunch this time and our Lions walked away with some Super Duper Awards.#Thala Dhoni for leading the team with the willow and scoring the most runs for the Super Kings in IPL 2019. ?? pic.twitter.com/aWwErJgyvV

CSK debutants Sai Kishore and Piyush Chawla also got their yellow jerseys from Dhoni and Fleming.

Chennai bagged left-arm spinner Sai Kishore at his base price of Rs 20 lakh at the IPL auction in December last year while Chawla was brought on board for a whopping Rs 6.75 crore.

“While Sam and Josh are on their way to the Den, our newest Lions Sai Kishore and Piyush Chawla got their #yellove wear,” CSK tweeted.

CSK meanwhile, also presented some of its players with special gifts on Thursday. All-rounder Shane Watson and Ravindra Jadeja were the ones to get specially-made mementos from the franchise.

Watson got special photo frame from CSK which has his animated version playing a shot from his 2019 IPL final knock in which he batted with a bloodied knee.

Jadeja on the other hand, got the replica of a golden sword with the message: “The Rajput Boy”. Only Indian player to get 100+ wickets and 1900+ runs in IPL. Most wickets by any left-arm spinner in IPL – 108 wickets.

That calls for the legendary sword celebration! ⚔️? #WhistlePodu https://t.co/cqT8UZa6LD

The IPL 2020 is all set to kick start on September 19 with defending champions Mumbai Indians taking on last year’s finalists Chennai Super Kings at the Sheikh Zyed Stadium in Abu Dhabi.