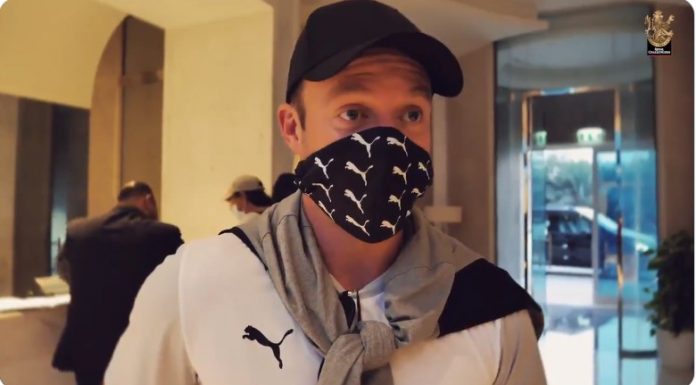 All doubts about the South African cricketers participation in the Indian Premier League (IPL 2020) have been laid to rest. The first batch of 3 Proteas Cricketers have arrived in UAE. Royal Challengers Bangalore received a shot in the arm as their South African stars AB De Villiers, Dale Steyn and Chris Morris joined the rest of the squad members on Saturday morning.

There were concerns about the South African players’ participation in the early stages of IPL 2020 because of travel restrictions imposed by the South African government but De Villiers, Steyn and Morris’ arrival in Dubai almost a month before the tournament begins on September 19, has put all of those to rest.

“The Proteas Arrive And here it is RCB fans, the moment you’ve all been waiting for! @abdevilliers17, @dalesteyn and @tipo_morris have joined the team in Dubai! #PlayBold #TravelDay #IPL2020 #BoldDiaries,” RCB captioned the video.

Arriving in Dubai de Villiers said: “I’m very excited, very happy to be here. Travelling was bit different to normal but we’ve made it here with my South African friends and we’re very happy to be back in the RCB family, and looking forward to my Covid Test.”

De Villiers has been an integral part of the RCB set-up since IPL 2011.

“It’s been quite a while that we’ve played the game that we love. So yeah very challenging but we’re very excited to get going, a little bit nervous too to be honest,” said Chris Morris, who was one of costliest buys of the auction when he was picked up by RCB for a whopping INR 10 crores.

“It’s gonna be interesting to play in the heat. We got here like 3 in the morning and it was steaming outside. Looking forward to what’s it gonna be like in a few weeks,” said Dale Steyn who was picked up in his base price in the AUCTION.

The RCB players travelled together from India to Dubai on Friday. There was a lot of speculation about captain Virat Kohli when he was not seen in the photos or videos shared by RCB on their officla twitter handle. But as revealed by InsideSport Kohli booked his exclusive charter aircraft and has landed in UAE on Friday itself.