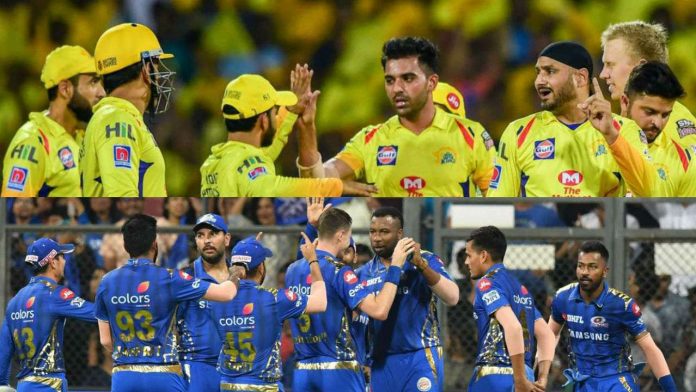 The opening game of the 13th edition of the Indian Premier League is all set to feature Chennai Super Kings after all their players tested negative in the 2nd Covid-19 test conducted on Thursday.
According to the sources, MS Dhoni’s CSK will play the opening match of IPL 2020 against Rohit Sharma’s Mumbai Indians. The marquee clash between the two most successful teams of IPL was getting pegged back because of the Covid-19 situation in the CSK camp.
But after two consecutive Covid-19 negative tests, the mouthwatering clash is all set to make a comeback.
“We never had a problem with playing the opening game of IPL 2020. It will be the IPL Governing Council decision. We are game for the opener against the Mumbai Indians”, said Kasi Viswanathan, CEO of CSK to InsideSport.
After 13 CSK members including 2 players tested positive in the CSK camp, BCCI was all set to give Dhoni’s team little more time to prepare themselves by replacing them from the opening game of IPL 2020. It was being speculated, Virat Kohli’s Royal Challengers Bengaluru will replace CSK in the opening match to play 4 times champion Mumbai team.
But all that has been put to rest.
CSK vs Mumbai Indians on the opening evening of IPL 2020 on September 19th is back on track.
Sourav Ganguly on Thursday had announced that schedule for the IPL 2020 will be released on Friday.
“We understand schedules are delayed. It is almost on the verge of getting final and should be released by Friday”, said Ganguly.
The BCCI has been handed exemption from quarantine for all the franchise and now players will not have to self-isolate upon travelling from Dubai to Abu Dhabi or Sharjah to Abu Dhabi. However, everyone associated with IPL 2020 will have to maintain the strict protocols linked to the bio-secure environment created by the respective franchises.
With all decks cleared now in regard to the permission IPL Governing Council chairman Brijesh Patel will release the schedule today in Dubai.
Sources also said that the tournament will be held across three venues in Dubai, Abu Dhabi and Sharjah and all 60 matches will be held.
IPL 2020 : When will MS Dhoni led Chennai Super Kings start its practice ?
After the entire team tested negative in the 2nd test, CSK is now allowed to move out for practice which may start either on Friday or Saturday according to the CSK CEO.
“We are so relieved with the negative tests. We will start practice either on Friday noon or Saturday morning as per the decision of coach and the captain”, said Kasi Viswanathan, CEO of CSK to InsideSport.
Meanwhile, the two CSK players Deepak Chahar and Ruturaj Gaikwad who had tested positive last week are staying in a separate hotel and will have to undergo two fresh tests after their two-week quarantine. Post that only, they will be allowed to step out for practice.