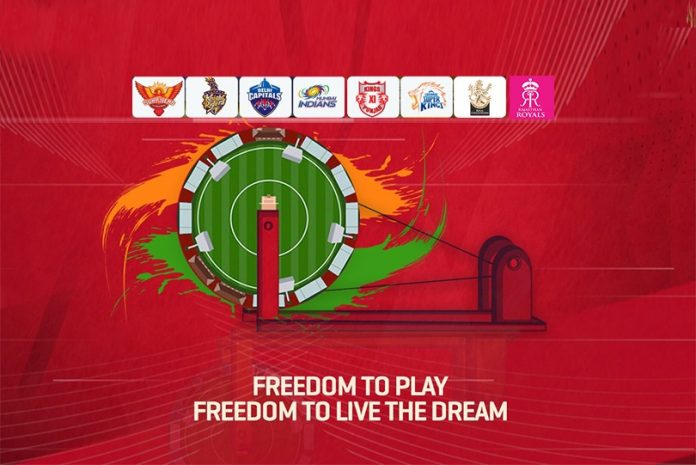 From Chennai Super Kings to Mumbai Indians, all the IPL Franchises send wishes on Independence Day.These days teams and IPL players, both are busy in preparations for the upcoming season of Indian Premier league(IPL 2020) which is set to take place in UAE across the three venues -Dubai,Abu Dhabi and Sharjah.

Today on the occasion of Independence day which is celebrated every year on 15th of August to remember and honour the mighty sacrifices our courageous leader and fighters put forward for our country .India celebrates its 74th Independence Day and all the 8 IPL Franchises(Chennai Super Kings,Mumbai Indians,Kolkata Knight Riders,Sunrisers Hyderabad,Kings XI Punjab,Royal Challengers Bangalore,Rajasthan Royals) shared a post on social media platforms to celebrates India’s 74th Independence day.

IPL 2020: Check out how IPL Franchises Celebrates  74th Independence Day 2020
MS Dhoni Led Chennai Super Kings, the team which plays its home matches at the M. A. Chidambaram Stadium in Chennai, took to Twitter and posted a very special message. Here’s to our nation that never stops being incredible! CSK found India never stops being incredible!CSK captioned the post.

Virat Kohli Led Royal Challengers Bangalore  was founded in 2008 by United Spirits and named after the company’s liquor brand Royal Challenge.RCB said this Independence Day, let us all stand as one and salute everyone who has fought for our freedom! Tweets Freedom in the mind.While sharing the post RCB wrote”Faith in the words. Pride in our souls. #PlayBold #HappyIndependenceDay #74YearsOfIndependence

Freedom in the mind.
Faith in the words.
Pride in our souls.

This Independence Day, let us all stand as one and salute everyone who has fought for our freedom! ?? ??#PlayBold #HappyIndependenceDay#74YearsOfIndependence pic.twitter.com/Pm1kpsju0r

Kolkata Knight Riders,  home of the Knight Riders is the iconic Eden Gardens stadium. today KKR tweets a special messages.74 years of Independent India. Let’s uphold our values of brotherhood and prosper together as one nation Jai Hind! Flag of India.Read’s MI post.

Let’s uphold our values of brotherhood and prosper together as one nation ?
Jai Hind! ??#HappyIndependenceDay #IndependenceDay2020 #India #KKR #KolkataKnightRiders pic.twitter.com/bVeBBHt4zb

Sunrisers Hyderabad, is owned by Kalanithi Maran of the Sun TV Network and was founded in 2012 after the Hyderabad-based Deccan Chargers were terminated by the IPL.Sunrisers post a very hearfelt message on Independence day.

Delhi Capitals also Salutes the sacrifice of our freedom fighters, the heroism of our bravehearts, and the indomitable spirit of our great nation.Wishing everyone a Happy 74th #IndependenceDay.

Saluting the sacrifice of our freedom fighters, the heroism of our bravehearts, and the indomitable spirit of our great nation ??

Rajasthan Royals said in a tweet India ia nation that loves cricket like no other.RR team is based at the Sawai Mansingh Stadium in Jaipur.

Kings XI Punjab urges fans to saty at home this independence day and protect ouselves and our loved ones!

This #IndependenceDay, let’s take a pledge to stay at home and protect ourselves and our loved ones!

Meanwhile,Indian Premier League (IPL 2020) caravan is getting ready to fly to UAE next week. For the next 3 months, UAE’s mega cities Dubai and Abu Dhabi will be the base for the IPL franchises and BCCI. None of the franchise IPL organizers and management has decided to stay in Sharjah. All the teams and BCCI will either stay in Dubai or in Abu Dhabi.