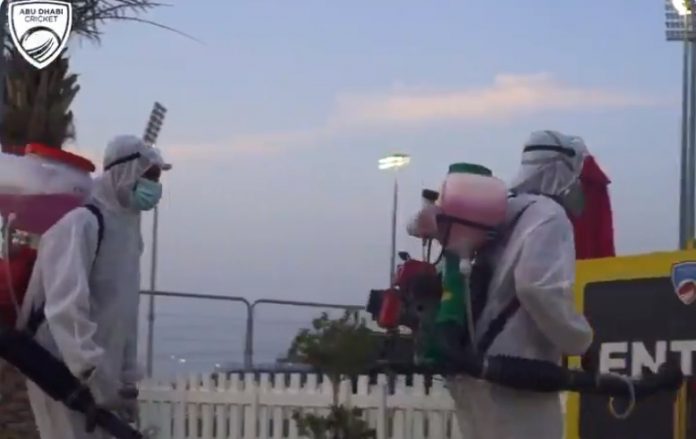 The 13th edition of the Indian Premier League will be played simultaneously on all grounds in Dubai, Sharjah and AbuDhabi.
Currently the Sheikh Zayed Stadium is getting ready for the IPL 2020. The local stadium authorities are making the stadiums BIO-SECURE & Covid-19 proof by sanitizing the stadium.
Take a look.

The Sheikh Zayed Stadium costed $23 million to build and was opened in May 2004. Some of the IPL 2014 games also took place in the stadium.
The stadium has a large stand at either end, with the areas square of the wicket offering grass banks for additional seating. Though the crowds are not allowed this IPL but otherwise It can hold 20,000 people.
Currently both Mumbai Indians and Kolkata Knight Riders teams are training in the stadium.
Click the link below for- IPL 2020 LIVE Score, Ball by Ball Commentary, IPL LIVE Streaming, IPL Schedule, IPL Result Update, IPL LIVE Link
https://www.insidesport.in/indian-premier-league/