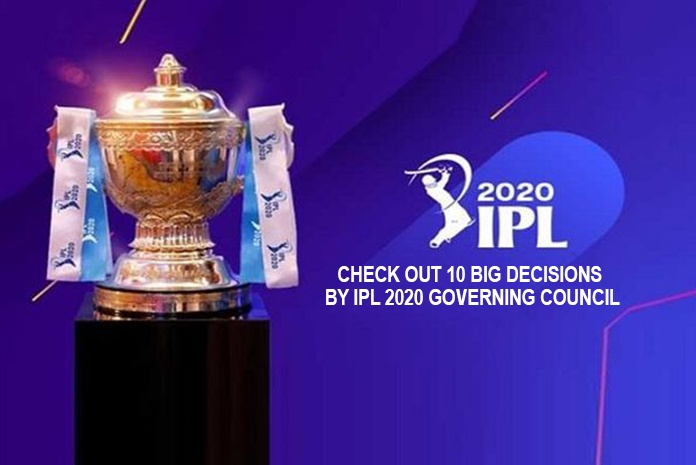 The Board of Control for Cricket in India (BCCI) in its all-important Governing Council meeting of the Indian Premier League (IPL) has decided to hold the 13th edition of the league from September 19 to November 10. This will include 10 double headers. And the evening matches will start at 7:30 p.m. IST.

Speaking to IANS, a BCCI official said that it was decided to take the IPL into another week and that will see the final being played on November 10. The official also said that to ensure that there is enough spacing between games considering the strict protocol that will be in place, 10 double headers have been planned.

“We have decided to go up till November 10 and so the final will be held on a weekday for the first time. Also, to ensure that there is enough gaps between games considering the travelling and the bio secure environment and keeping all these things in mind, we will have 10 double headers this season,” the official revealed.

IPL 2020 Decision 1 :  IPL 2020 will be held from September 19 to November 10 in the UAE. The final is being held on a Tuesday before the Diwali weekend.
Also Read : https://www.insidesport.in/ipl-2020-ipl-2020-final-dates-released-indian-premier-league-will-be-played-from-sep-19th-to-nov-10th-2/
IPL 2020 Decision 2 : All evening matches in IPL 2020 will have a new start time — 7:30 pm IST. 10 double-headers over 53 days.
IPL 2020 Decision 3 : IPL teams to leave for the UAE after August 26. Each team will be allowed to have maximum of 24 players in their squad.
Also Read : https://www.insidesport.in/ipl-2020-ipl-2020-final-dates-released-indian-premier-league-will-be-played-from-sep-19th-to-nov-10th-2/
IPL 2020 Decision 4 : VIVO will be retained as TITLE Sponsor by BCCI.
Also Read : https://www.insidesport.in/ipl-2020-ipl-gc-decides-to-continue-with-vivo-as-title-sponsor-of-ipl-2020/
IPL 2020 Decision 5 : Covid-19 replacements will be allowed in IPL 2020. If a player is unwell due to the novel coronavirus, he can be replaced during the course of the tournament.
IPL 2020 Decision 6 : No crowd will be allowed at UAE stadiums initially. From the midway point, limited number of fans might be allowed at stadiums, subject to approval from UAE government.
IPL 2020 Decision 7  : All players, be it Indian stars or overseas recruits, will be traveling via chartered planes.
IPL 2020 Decision 8 : Standard Operation Procedures (SOPs) document for IPL 2020 is being readied in consultation with specialist firms. Plans for the creation of bio-secure bubbles being done in consultation with a specialist firm.
IPL 2020 Decision 9 : Top medical professionals from leading hospitals and institutions have been roped in to handle the part of the medical protocol of the SOPs.
IPL 2020 Decision 10 : BCCI has managed to retain all sponsors for IPL 2020, including Chinese sponsors.Women’s T20 Challenge gets approval. 4-team tournament to be held between November 1 and 10 in the UAE.

Franchises have now also been asked to start the visa process.

“We have been asked to start our visa process,” an official of one of the franchises told IANS.

The BCCI is also optimistic of getting the complete go-ahead from the government in the coming week to move the tournament to UAE.

“The BCCI has received clearance from the Sports Ministry and we are hopeful of a positive response from the other departments quite soon as well,” a BCCI official had told IANS on Saturday.