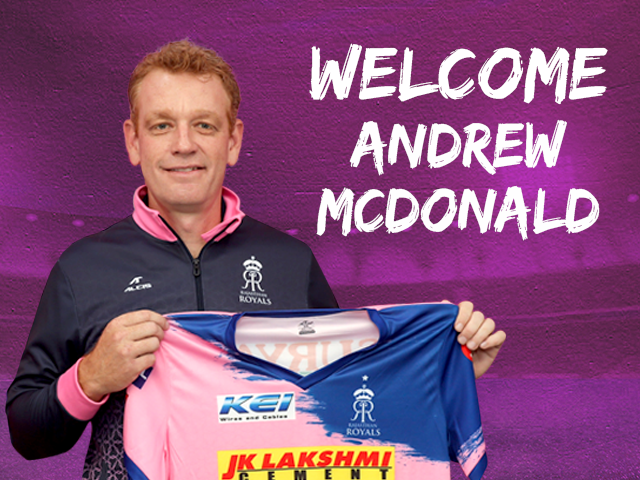 Rajasthan Royals have appointed Australian coach and cricketer Andrew Barry McDonald as their new Head coach for a tenure of three years as the Indian Premier League Season 1 Champions are eyeing to regain the coveted title that has deserted them for a decade now.

The former Australian all-rounder has outstanding credentials and has coached Leicestershire, Victoria, and the Melbourne Renegades. The 38-year-old, who played four Tests for Australia, had guided Victoria to the title win in Sheffield Shield in his first year as senior coach. The Victorian then moved the Renegades from 7th position to win the Big Bash this year.

Rajasthan Royals have reported the signing on their official website.

“We are delighted to appoint Andrew as our Head Coach. He shares our belief in discovering potential and championing dreams and is aligned with our vision to continue to drive innovation in the IPL. Andrew will be preparing for the season by sharing experiences and best practices with exceptional coaches in other sports and will be visiting India in the near future to meet the Royals team, both on and off the field.” said Ranjit Barthakur, Executive Chairman, Rajasthan Royals.

“Andrew’s innovative, forward-thinking nature, along with his experience in the IPL and success in other leagues is why we have selected him as Head Coach to help us drive long term success. He is data-focused and an impressive man manager who remains well versed with the rigors of modern-day cricket,” said Zubin Bharucha, Head of Cricket, Rajasthan Royals.

“I’m delighted to join the Royals family. It’s a great honor to take on this responsibility. The Rajasthan Royals is a new, exciting challenge for me, and I can’t wait to get started working with our world-class players and coaches in one of the biggest sporting leagues in the world.” Andrew McDonald said.