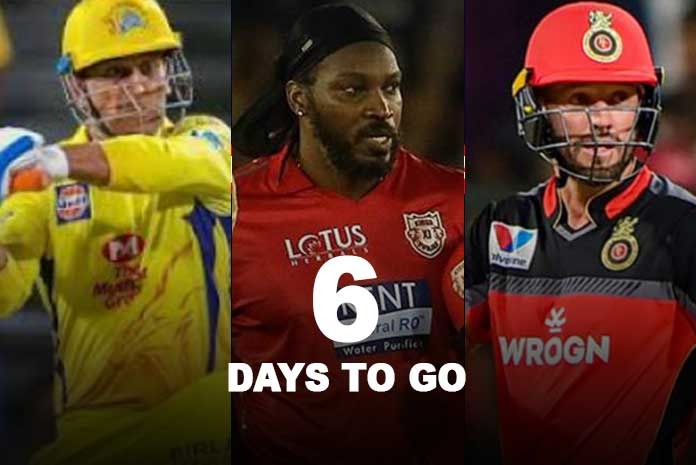 The sight of watching a batsman step out and belt the white ball straight over the sight screen is a possibility on most occasions in a typical IPL contest. The likes of MS Dhoni and Virat Kohli clobbered the leather at will and on demand. While Kohli is sixth and Dhoni is third in the list of Most sixes by a batsman in IPL history, we wonder, which are the two names at the top.

It will be interesting to see who progresses in this list this season.

RCB captain Virat Kohli is the leading run scorer in all of IPL history. The run-machine who has made a name out of shattering records however, doesn’t feature in the top five of most sixes but is very much part of the chasing pack, coming in at number six with 190 maximums to his name.

India’s left-handed middle-order batsman, Suresh Raina has been one of the most consistent players in the IPL history. He has played for two franchises in the twelve years of IPL, with the Chennai Super Kings being his prime team. The Uttar Pradesh-born batsman has aggregated 5,368 runs in the IPL.

His strike rate of 137.14 shows that Raina loves to take the aerial route to keep the scoreboard ticking. The 2011 World Cup winner had slammed 22 sixes in 2010, the year in which Chennai Super Kings lifted their maiden IPL title. He had also hit 21 sixes while in 2019, the 33-year-old had sent nine balls out of the ground.

India’s opening batsman, Rohit Sharma has hit the same number of sixes as Suresh Raina but his lesser IPL appearances have allowed him to grab the fourth spot in this list. Just like Raina, Rohit has featured in all the IPL seasons and played for two franchises.

He kicked off his IPL career as a part of Deccan Chargers in 2008. The Hitman played three seasons for the Chargers, scoring eight half-centuries and hitting 51 sixes. He moved to Mumbai Indians in 2011.

Playing for his home franchise, the right-handed batsman struck 31 sixes in the first two seasons before Ricky Ponting elected him as the captain of the team. Rohit showed no nerves in his first IPL season as the MI skipper. He took his team to the title and led his army from the front by striking 28 maximums.

Since then, Sharma has not allowed the bowlers to take the control against him as he has finished every season with a minimum of nine sixes. In IPL 2019, the 32-year-old batsman had scored 10 sixes and, he will look to increase that number in the approaching IPL tourney.

The captain of IPL’s most consistent team, MS Dhoni has been the backbone of Chennai Super Kings since day one. The Jharkhand-based player has guided the team to three IPL championships with his wit and might. He has been phenomenal as a captain, unearthing talents like Ravichandran Ashwin, Joginder Sharma, Mohit Sharma, Deepak Chahar among many others.

Also, he can step up and do the job for the team when the top guns do not fire. Dhoni has single-handedly changed the fate of CSK’s matches with his big-hitting abilities. The 38-year-old batsman has scored 4,432 runs in the 190 IPL matches he has taken part in.

The former Indian skipper has registered 23 fifties in the tournament. Besides, he holds the Indian record for slamming the most sixes in the IPL. No other Indian batsman has hit over 200 sixes in the league while Dhoni is leading the charts with 209 sixes. He was at his destructive best in 2018 where the veteran had banged 30 maximums.

It will be interesting to see if he can better his record of 30 sixes in the upcoming season of the cash-rich league.

Former South African batsman, AB de Villiers has made a name for himself playing for the Royal Challengers Bangalore in IPL. The right-handed batsman has played for two IPL franchises in the last 12 years. He made his IPL debut as a part of Delhi Daredevils in 2008. The wicket-keeper batsman had a disastrous outing in 2008 as he could only score 95 runs in the tournament at a strike rate of 96.93.

He then worked on his batting style and enjoyed huge success in IPL 2009, which was played in his home country. De Villiers recorded his first IPL hundred in that season besides striking 12 maximums. However, his form dipped when the tourney returned to India in 2010. His disappointing performances led to his exit from the Delhi team.

Royal Challengers Bangalore snapped him up at the auction next and he became a completely different player after joining the Bangalore-based franchise. With the addition of some new shots in his arsenal, AB de Villiers hit boundaries with supreme ease. After slamming just 13 sixes in the first three seasons, the Proteas player whacked 199 sixes in the next nine editions to secure the second position in this list.

His best season came in the year 2016 when the former South African captain smacked 37 balls out of the park.

The king of sixes in the Indian Premier League, Chris Gayle has hit more sixes in the tournament than Virat Kohli and Brendon McCullum combined. The Universe Boss has played for three IPL teams in his career – Kolkata Knight Riders, Royal Challengers Bangalore and Kings XI Punjab.

When he went unsold in the 2011 IPL Auction, it seemed like the West Indian giant would never return to the tourney. However, Royal Challengers Bangalore signed him up as Dirk Nannes’ replacement and that kicked off Gayle’s era in the IPL. He had not taken part in the 2008 IPL season yet he stands at the top of this list with a lead of 114 maximums.

This showcases the sheer big-hitting power possessed by the Jamaican who holds the record for the fastest IPL hundred and the highest individual score in IPL as well. The left-handed batsman has registered 6 hundreds in the IPL besides hitting 369 fours and 326 sixes.

The former West Indies captain breached the 50-sixes milestone twice in his IPL career. He had deposited 59 balls into crowd during IPL 2012 and in the succeeding edition, Gayle had struck 51 sixes.

He will look to cross the 350-sixes mark in 2020 as he will turn for Kings XI Punjab once again.