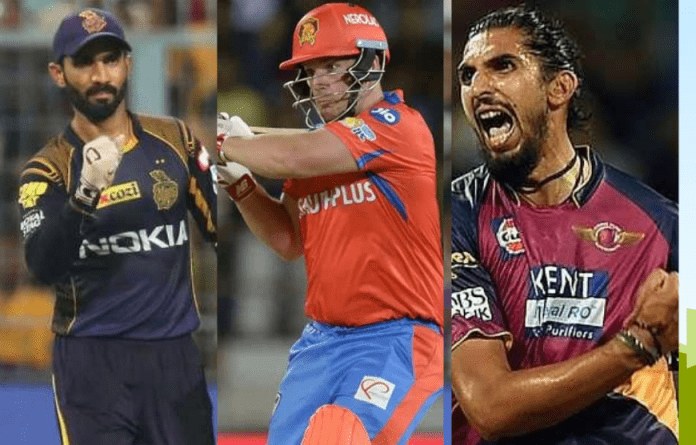 The 13th edition of Indian Premier League (IPL 2020) is all set to start from September 19, with all eight teams preparing to battle it out in the United Arab Emirates.

While, Virat Kohli (Royal Challengers Bangalore), MS Dhoni (Chennai Super Kings) and Rohit Sharma (Mumbai Indians) are three such players who are now synonymous with their respective IPL teams, there are some players who have not been able to find permanent homes for themselves in the IPL. They move from one team to another after a season or two due to myriad reasons like poor form or injury or due to becoming surplus to a team’s requirement.

In this article, we take a look at five such players whose journeys in the IPL have been nothing short of adventurous as they have represented five or more different franchises in the competition.

The first player to feature in this list is Sri Lankan all-rounder Thisara Perera who is only the second overseas player to have played for five or more different IPL franchises over the years.

Between 2010 and 2016, with the exception of 2014, Perera turned up for six different IPL franchises: Chennai Super Kings, Kochi Tuskers Kerala, Mumbai Indians, Kings XI Punjab, Sunrisers Hyderabad and Rising Pune Supergiants respectively. He has not been a part of the IPL since 2016.

Indian wicketkeeper-batsman Dinesh Karthik has also been a frequent traveller in the IPL. Before being drafted in as the skipper of the Kolkata Knight Riders (KKR) ahead of the 2018 edition of the competition, the Tamil Nadu player had turned up for five different IPL franchises.

A veteran of 182 matches, Karthik began his IPL career with the Delhi Daredevils in 2008, staying with them till 2010 and playing 42 matches for the franchise. He then played the entire 2011 IPL season for Kings XI Punjab before moving to Mumbai Indians for the next two editions of the competition.

The 35-year-old made a return to Delhi Daredevils in IPL 2014 before turning up for the Royal Challengers Bangalore in IPL 2015. Karthik played the next two IPL editions for Gujarat Lions before arriving at KKR in 2018.

Parthiv Patel, like Dinesh Karthik, has also represented as many as six different IPL franchises.

Patel, who made his IPL debut for Chennai Super Kings (CSK) in the inaugural edition of the competition in 2008, played as a specialist batsman for the franchise till 2010.

From 2011 to 2013, the diminutive wicketkeeper played one IPL season apiece for three different teams: Kochi Tuskers Kerala, Deccan Chargers and Sunrisers Hyderabad respectively. In 2014, he opened the batting and also kept wickets for Royal Challengers Bangalore.

Patel then spent three consecutive seasons with Mumbai Indians where he won two IPL titles (2015 and 2017) to add to his first won with CSK in 2010. After returning to RCB in 2018, IPL 2020 will be his third-consecutive season in the competition for the franchise.

Next up, is Indian pacer Ishant Sharma who after three largely unsuccessful seasons with the franchise, Sharma was bought by Deccan Chargers in 2011. After playing a couple of IPL seasons for the Chargers, Sharma did likewise with Sunrisers Hyderabad as well.

The lanky pacer was next picked up by Rising Super Giants for the 2017 edition of the IPL but was released by the franchise after just one season.

Kings XI Punjab then bought Ishant Sharma for IPL 2018 but used him primarily as a replacement bowler that season. 2019 saw the Delhi boy’s homecoming as he turned up for the Delhi Capitals.

The ultimate IPL vagabond, Australian skipper Aaron Finch is the only player to have turned out for as many as seven franchises in the competition. The 33-year-old opener will, in fact, be donning his eighth different IPL jersey when he will turn up in RCB colours next month.

The burly right-handed batsman made his IPL debut in 2010 for Rajasthan Royals but featured in just one match that season before playing eight matches in the next two editions of the competition for Delhi Daredevils.

Finch led the Pune Warriors in all their 14 games in IPL 2013 before moving to Sunrisers Hyderabad, for whom he played 13 games, the next year. In IPL 2015, the Australian played only three games for eventual champions Mumbai Indians before playing two full IPL seasons with the Gujarat Lions.

In 2018, Finch played ten IPL games for Kings XI Punjab before opting out of the 2019 edition of the competition to prepare for the 50-over World Cup.

Hopefully, he manages to stay for a while at RCB and add more firepower to the franchise’s famed batting lineup in IPL 2020.