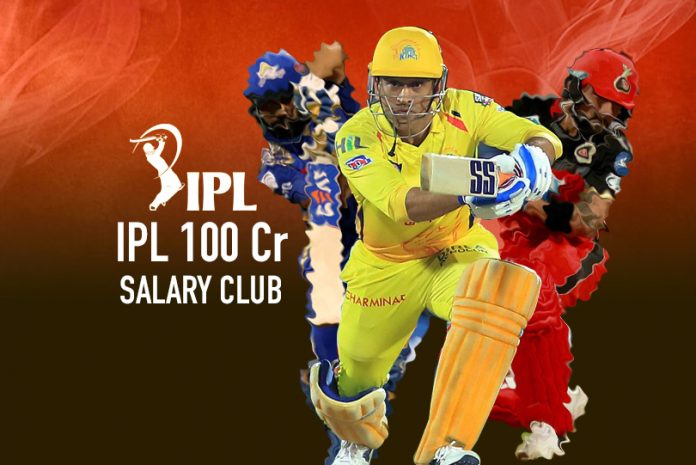 The Indian Premier League’s ₹100 crore salary club is a very exclusive club, with entry allowed only to those who have breached the ₹100 crore mark in career IPL salaries over the years. IPL 2020 is in its 13th edition and Its exclusivity can be gauged from the fact that only three players till date have been able to reach the ₹100 crore summit with respect to total IPL salaries. Chennai Super Kings – Super Mahendra Singh Dhoni, Mumbai Indian captain Rohit Sharma and India’s and Royal Challenger Bengaluru’s captain Virat Kohli are the only ones according to IPL Moneyball who have earned more than 100 Crore in IPL Salaries.

1 MS Dhoni
MS Dhoni (Captain Cool) is the highest earning IPL player. MS Dhoni has earned a total of ₹ 137.8 crores in salaries over 13 years in his IPL journey. Ms Dhoni played for Chennai Super Kings for 11 seasons. In 2016 season and 2017 season Dhoni has played for Rising Pune Super Giants, the time when the Chennai franchisee along with Rajasthan Royals were in their 2-year suspension term.

Ms Dhoni is now back with the yellow army. CSK retained him for ₹15 crore for IPL 2020 season. The star keeper-batsmen current season salary saw a hike of 150% from the inaugural edition when he was paid ₹6 crore.

Also Read: IPL : ‘MS Dhoni to be presented with special song on his birthday’, says…

2 Rohit Sharma
Rohit Sharma (Hitman) is the 2nd highest earning IPL player. Rohit Sharma has earned a total of ₹ 131.6 crores in salaries over 13 years in his IPL journey. Rohit started his IPL career with Deccan Chargers. The star batsman has been associated with  Mumbai Indians (MI) since 2011. The Indian cricket team opener took over the team’s captaincy a couple of games into the 2013 season and led MI to their maiden IPL title. In the same year, MI also completed a grand double when they clinched the Champions League T20 title. His captaincy was put to test in the 2015 season after the team won just one of their first six games and were struggling to stay afloat. Mumbai Indians then staged a remarkable turnaround and lifted the Trophy for the second time with a convincing win in the final.

Rohit Sharma was retained by the Reliance group-owned Mumbai Indians (MI) for ₹ 15 crores in IPL 2020, a 400% jump from the inaugural season salary of ₹3 crores.

3 Virat Kohli
Virat kohli (Run Machine) is the 3rd highest earning IPL player. Virat kohli has earned a total of ₹ 126.2 crores in salaries over 13 years in his IPL journey
Virat Kohli was retained by the Royal Challengers Bangalore (RCB) team for ₹ 17 crores in IPL 2020, a 14000% jump from the inaugural season salary of ₹12 L.
Virat is the new-age cricketer who is aggressive and expresses his mind on the field. In 2008, Kohli was inducted in the RCB squad and started leading the side in the year 2013. In the year 2016, he sat atop on the leading run-scorers list, thereby donning the Orange Cap at the end of the ninth edition of the league. The highest paid cricketer in IPL, ViratKohli was the first one to be retained by his franchise ahead of the IPL 2018 Player Auction and will continue to lead his side.

Also Read: Virat Kohli: Top 30 Most Interesting facts about Kohli that every fan should know

The above analysis was done using InsideSport’s Moneyball, a tool to calculate professional salaries of the Indian sports and Indian sports-stars.